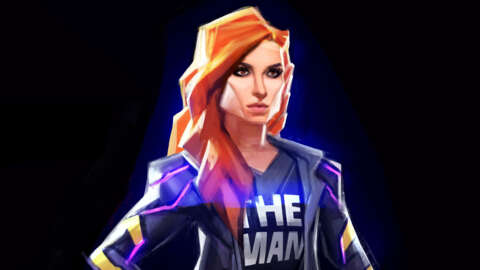 Bit Fry’s upcoming arcade basketball game Ultimate Rivals: The Court for Apple Arcade has revealed that WWE superstars will be competing with other top athletes. And two of the big names revealed in this announcement are “The Man” Becky Lynch and Bayley.

Arriving first on Apple Arcade later in the year, then followed by Steam and console releases, Ultimate Rivals: The Court will feature two of WWE’s biggest names. In the concept art below, the two wrestlers will appear in their ring attire, which you can check out below. When the WWE characters arrive for The Court, they’ll also be added to the existing, hockey-style game, Ultimate Rivals: The Rink.

Ultimate Rivals: The Court will feature WWE superstars along with athletes from the NBA, WNBA, NHL, MLB, NFL, and USWNT. From the announcement trailer back in March, the gameplay is reminiscent of NBA Jam–and it features audio tracks from Tim Kitzrow (NBA Jam, NFL Blitz) to boot. Ultimate Rivals features three-on-three basketball with over-the-top, bombastic special moves and very high scoring games–as was seen in the gameplay teaser released in late March. No official release date or price as been revealed as of this writing. Both Roman Reigns and Sasha Banks have already been revealed for the upcoming game.

Lynch is one of the most popular wrestlers with WWE, as “The Man” took the company by storm in 2018 and 2019. Her most recognizable moment from 2018, leading to Survivor Series, is when she attacked Raw wrestlers and got her nose broken. Covered in blood, she taunted the Raw roster from the stands. She was one of the first women to main event Wrestlemania, as she faced Charlotte and Ronda Rousey for the Raw and Smackdown Women’s Championships in 2019. Lynch is a one-time Raw Women’s Champion and three-time Smackdown Women’s Champion. On May 11, 2020, Lynch vacated the Raw title after announcing she was pregnant. She has not been back on WWE TV since then.

Speaking of WWE, this Saturday and Sunday is Wrestlemania 37, which will air on Peacock in the US and on the WWE Network everywhere else. Come back to GameSpot both nights at 5 PM PT / 8 PM ET for live coverage and a review of the show. On the evening of April 11, there will also be a post-Wrestlemania episode of Wrestle Buddies, GameSpot’s pro wrestling podcast. For now, check out the Wrestlemania 37 predictions episode below.

Ring Fit Adventure Is Getting An Official Exercise Mat