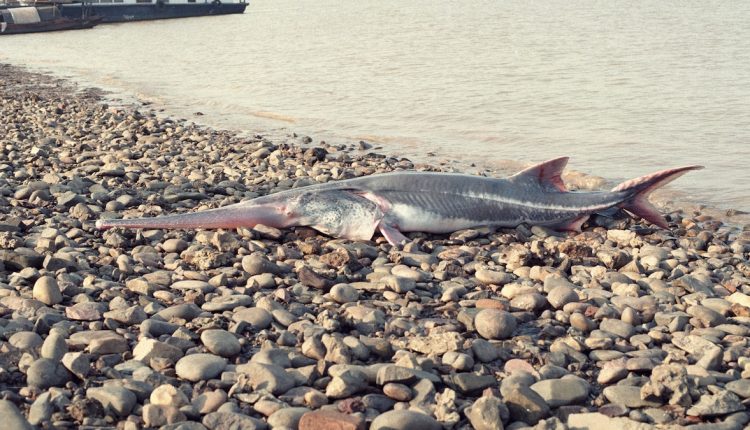 The Chinese paddlefish and its close relatives have been around for at least 200 million years. The species, reaching up to 23 feet in length, survived unimaginable changes and upheavals, such as the mass extinction that killed the dinosaurs and marine reptiles like plesiosaurs that it swam alongside. In its time, flowering plants evolved, and came to populate the shores of its ancestral home, the Yangtze River, in modern-day China.

Much later, bamboo came on the scene, and well after that, giant pandas. In the last few thousand years, a blink in evolutionary time, the land filled with people, and China became the most populous country on Earth. In the muddy waters of the Yangtze, the paddlefish lived as it had for eons, using its special sword-like snout to sense electrical activity to find prey, such as crustaceans and fish.

But there’s one phenomenon this ancient species, sometimes called the “panda of the Yangtze,” could not survive—humans. A new paper published in the Science of the Total Environment concludes that the species has gone extinct, mainly due to overfishing and dam construction.

It’s “a reprehensible and an irreparable loss,” says study leader Qiwei Wei of the Chinese Academy of Fishery Sciences, who’s been looking for the animal for decades.

“It’s very sad,” adds Zeb Hogan, a fish biologist at the University of Nevada, Reno, and a National Geographic Explorer who wasn’t involved in the study. “It’s the definitive loss of a very unique and extraordinary animal, with no hope of recovery.”

Hogan says the paddlefish’s extinction should serve as a wake-up call to protect other freshwater species. Large fish, in which he specializes, are especially at risk: Most of the biggest freshwater animals are threatened with extinction, he says.

“This is the first of these very large freshwater fish to go and many are at risk—the concern is that more will go extinct, but the hope is that we can reverse their decline before it’s too late,” Hogan says.

The species gradually declined over the last century thanks to overfishing; in the 1970s, 25 tons of paddlefish were harvested per year on average.

But what really did it in, the scientists conclude, were dams—specifically the Gezhouba Dam, built on the main stem of the Yangtze, a little over a thousand miles from the sea. This dam, which was constructed without a fish ladder or bypass, cut off the paddlefish from their only spawning grounds upstream, which had only been discovered in the late 1970s.

Populations of the fish continued to dwindle after the 1981 dam construction, but nobody had yet figured out how dire the situation was, says Ivan Jaric, a co-author and biologist at Czechia’s Institute of Hydrobiology and the University of South Bohemia. As is often the case, there can be a significant lag between major disturbances and their impact. The researchers estimate the fish had become functionally extinct by 1993, meaning there were not enough fish to meaningfully reproduce.

The critically endangered Chinese giant salamander, photographed here at the Atlanta Zoo, is the biggest amphibian in the world.

The critically endangered Chinese giant salamander, photographed here at the Atlanta Zoo, is the biggest amphibian in the world.

Still, sightings continued and several individuals were captured in a series of failed attempts to start a captive-breeding population. In 2002, in Nanjing, a female was captured and urgent efforts were made to save her—but she died a month later.

In 2003, Wei and colleagues attached a tracking tag to a Chinese paddlefish that was accidentally captured near Yibin, in south-central China. They released it to see where it might go, but within hours lost all signals from the tag. That was the last of the species ever seen alive.

The researchers say the best time to have started conservation efforts was before 1993, or certainly before the early 2000s, which is when they began in earnest. The paper estimates the fish went extinct between 2005 and 2010. (What is extinction? The answer is complicated.)

The study team looked for Chinese paddlefish at hundreds of locations along the Yangtze, as part of an ongoing biological survey of the entire river basin. They used various types of nets, sonar, electro-fishing gear and other techniques to locate any representatives of the species, all to no avail. They also monitored fish markets around the country.

The researchers then used a mathematical model to determine the likelihood that the species is extinct, based on previous population size and the intervals between sightings.

Jaric says there’s a chance that there could still be paddlefish out there, but it’s very unlikely.

“Lack of observations during the surveys and during the past 16 years in rivers in highly urbanized regions with considerable level of water use makes new observations improbable,” he says.

The Chinese paddlefish was one of only two paddlefish species in existence; the only remaining relative is the American paddlefish, a vulnerable species found in the Mississippi River Basin in the United States. Both are closely related to the sturgeon family, of which 85 percent are threatened with extinction, making them the most imperiled group of animals, according to the International Union for Conservation of Nature.

Large fish are not only crucial players in their ecosystems, they’re sentinels for environmental quality, as the animals can only survive in healthy rivers, Hogan notes.

Other behemoths at risk include the Mekong giant catfish and giant freshwater stingray, which are both considered critically endangered and are threatened by proposed dams. (Learn more about the giant stingray, which could be world’s biggest freshwater fish.)

Lessons learned from the paddlefish’s loss include the importance of protecting what’s left in the Yangtze, and beyond.

“We must urgently act to save those species for which some chance still remains,” Jaric says. In the study team’s survey, they didn’t find another 140 species that they hoped to see, and some of these deserve much more attention to determine their conservation status, Wei says.

“Extinction risk assessments for all endangered Yangtze species should be conducted as soon as possible,” he says.

Furthermore, activities like fishing and dam construction deserve more scrutiny—as well as efforts to mitigate impacts of development, such as fish ladders.

“Moving forward, we need to balance the needs of humans with the needs of aquatic life,” Hogan says. “And that can be done, it’s not an impossible task.”