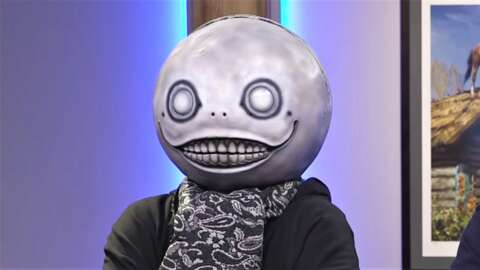 Yoko Taro On Grappling With Gacha Mechanics And Nier Reincarnation

Nier director Yoko Taro doesn’t want to just be another player in the gacha game space, and he had a lot of thoughts to share about mobile games.

In the Nier future, Nier Reincarnation will be in the hands of anyone who wants to download and play it on Android and iOS devices. Pre-registration for the closed beta test for this free-to-play gacha-style RPG opened up last week, and I think it’s fair to expect more than a game that tries to bend your will to become as RNG gods. With series director Yoko Taro at the helm and a lot of goodwill attached to the Nier name, Nier Reincarnation should live up to that reputation in some capacity and deliver some narrative satisfaction, right?

I recently spoke with Yoko-san, mostly about the newly minted Nier Replicant reissue and his insight in developing the series. But we also had a brief discussion about what the future holds with Nier Reincarnation (developed by Applibot) coming soon and how he wants it to carry the franchise’s name as the creative director for this mobile game.

To put it simply, Yoko-san isn’t exactly a fan of how gacha-style games have positioned themselves, especially as it relates to his perspective on game development. At first, you might find it ironic given the success of SinoAlice, a mobile RPG he also directed. And with gacha elements as a core mechanic of Nier Reincarnation, where does that leave him? Yoko-san understands why these kinds of elements exist, but still sees the opportunity to do something meaningful.

With the limited time I had to talk about Nier Reincarnation specifically, I asked: How are you managing the perception of being a mobile game in the Nier series? And how has your experience with SinoAlice factored into Reincarnation?

“With mobile titles–and this goes for both SinoAlice and Nier Reincarnation–I come from a perspective where I don’t have very much insight into the business structure,” Yoko-san prefaced. He continued with an admission, “I’ve never pulled a gacha, so I don’t understand how the business works on that end.”

Unexpectedly, for the next five-or-so minutes, he let out a stream of consciousness without hesitation, reconciling the realities of making a successful mobile game while staying true to the ethos of game development.

“But when I do communicate with the staff members who create these games with me, and those who are very well versed in creating mobile games, I think I want to make sure that I am impressing upon them about giving very thorough consideration of why you’re doing this. How do we want to make this game, this Nier title, on a mobile platform? And I’m sure they have an idea of what needs to get done as a mobile game. We want to have to pull the gacha, and we try to make it flashy so that it’s easier for them to spend money and whatnot. But I want to impress upon them what our position is and what it means to have originality. And I would try to tell that to the younger members of staff.

“For example, we’d have designers who would make these very fancy-looking gacha buttons so that it would look appealing for players who want to pull that gacha. But I don’t like that. I don’t like to push that concept. And It’s understandable with a mobile title. The banners are also quite flashy so that it draws attention, but these designers go through special schooling to learn about design. And do you really want to just create buttons? There’s got to be something that we want to convey, or that we want to infuse into the game.

“So with Reincarnation or SinoAlice, I would tell them…imagine taking a screenshot out of a game–of course you don’t want to slap it onto a T-shirt and walk around town, but just be proud of what you’re doing. Maybe proud enough to have it decorate the wall of your bathroom or something. And if you aren’t proud enough to have it in your bathroom, then don’t do it. And with Square Enix being more open to my feedback nowadays, it’s great. So, I think what I’m trying to do right now is change the mindset. Try to bring that sort of shift in the mindset of these newer staff members.”

Whether or not you think Yoko-san is the old man yelling at the clouds about taking pride in one’s work in game development, he at least understands why certain things are the way they are. However, he shifted the conversation to the second part of the question–his experience with SinoAlice and how that might be reflected in Nier Reincarnation.

“There is one thing that differs between SinoAlice and Nier Reincarnation–and this is something that I had to learn and reflect upon. Whenever I write a story, I start from the end, actually. I come up with the ending first,” he explained. As you can imagine, this would be especially difficult to do with an ongoing service-based game, but Yoko-san is finding better ways this time around, saying, “With SinoAlice, I already had the ending in mind, but it unexpectedly became very popular. And so I’m writing these stories that lead up to the ending and I have to continue parts [and make them fit], so it’s kind of hellish here. But I took that [lesson] and I applied it to Reincarnation so that there’s sort of a break, or an ending or conclusion of smaller story arcs.”

This approach to storytelling seems appropriate based on what we know about Nier Reincarnation as well–unlocking memories of the past is the main narrative crux, and can be used as a platform to build out or recontextualize Nier’s extensive lore through a collection of smaller stories. If you’re familiar with weapon stories from previous Nier and Drakengard games, that’s the foundation for the kinds of stories being told here. It’s a unique opportunity to bridge the gap between the series’ story-heavy chops and the needs for an ongoing mobile game. But its lifespan, of course, depends on its success.

Yoko-san concluded in our discussion, saying, “It all depends on if the game continues its service. If it ends prematurely of course, you’ll never be able to get to that ending, so I think it would be nice if we have the support of players, at least until that first ending.”

If you’re not caught up on Nier Reincarnation, a new trailer was revealed alongside the recent announcement for the beta’s pre-registration. You play as a young girl called The Girl of Light who’s accompanied by a little ghost named Mama (kind of like Grimoire Weiss or a Pod). As you avoid The Dark Monster in an overworld called The Cage, you’ll reveal more about Nier’s world through semi-automated turn-based RPG battles and side-scrolling exploration within other characters’ memories.

In my previous interview feature with Yoko Taro, I asked about how Reincarnation fits into the Nier universe and what we can expect. Unfortunately, he didn’t have much to share but did let us know, “If anything, I think it would be best to expect that I will provide the unexpected. I will do something that’s unexpected, yeah, I will work hard towards that.”

For more on the series, be sure to check out my Nier Replicant review, or my spoiler-free Nier Replicant endings guide in case you’re already playing. Yoko-san also revealed some interesting tidbits about his perspective and original ideas for Nier in our interview, and if you want a little throwback, check out my 2018 Nier: Automata Let’s Play I did with him and lead designer Takahisa Taura from Platinum Games.