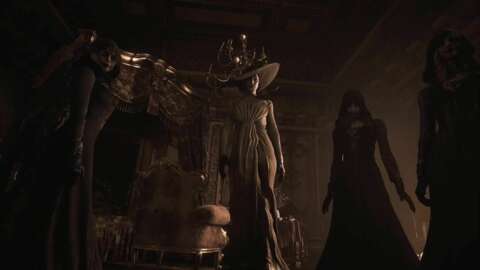 Resident Evil Village is difficult to separate from its main antagonist, Lady Dimitrescu. The villain has been one of the biggest talking points of the sequel, and we may not have even been saying her name correctly. No, “tall vampire lady” is not how you say it, either.

That’s at least according to Capcom, who advised Brittney Brombacher, the host of the latest Resident Evil Village Showcase, on the correct pronunciation. You can hear Brombacher pronounce the name in the video below, which she explains was the take that Capcom ultimately went with.

I’ve received a few questions about the pronunciation of Lady Dimitrescu! Capcom briefed me on how to say it properly (believe me, I asked) and they approved the take, soooo take that for what you will. 😉 https://t.co/GsZuUviEuV

That might be surprising given the spelling of the name, and some estimations of what pronunciation might be like from natives in Romania, a country that heavily inspires Resident Evil Village’s vague European setting.

How you pronounce the name might not be that important while playing Village, however, which will have you exploring four distinct areas according to the latest map reveal and confronting not only Lady Dimitrescu, but her daughters and scheming brother. The latest trailer for the game also shines some light on the mysterious role series mainstay Chris Redfield is playing, and how he might know more than he’s letting on to protagonist Ethan Winters.

Resident Evil Village launches on May 7 for Xbox One, PS4, Xbox Series X|S, PS5, and PC. A new demo will launch next week for PS4 and PS5 first, with limited time to play it. It will release to all other platforms on May 1.

National security threats are changing, but Canada is mired in conventional thinking

Here’s How Sony Made The PS5’s Packaging Fully Recyclable

Ring Fit Adventure Is Getting An Official Exercise Mat