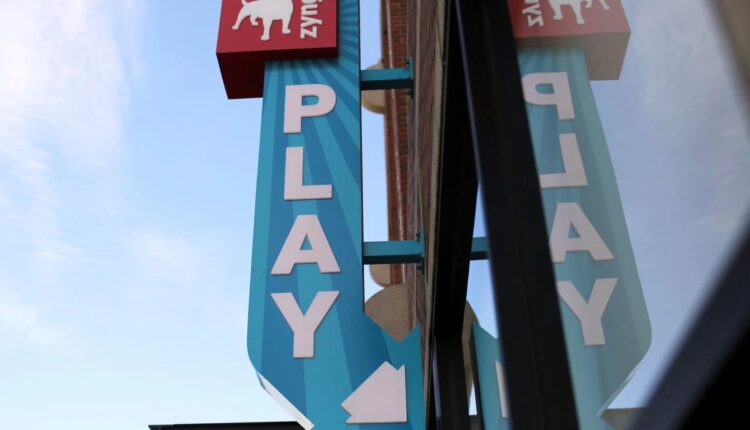 The Zynga logo is pictured at the company’s headquarters in San Francisco, California April 23, 2014. REUTERS/Robert Galbraith

Aug 5 (Reuters) – Zynga’s disappointing full-year bookings forecast due to a slowdown in gaming, and announcement of a potential acquisition worth over half a billion dollars dragged the mobile developer’s shares 20% lower in extended trading.

The company said on Thursday it agreed to buy China’s StarLark, the creator of “Golf Rival”, for $525 million in a cash-and-stock deal.

“FarmVille”-maker Zynga has spent billions of dollars on acquiring mobile game developers Peak, Rollic and Echtra Games to beef up its game roster after gaming skyrocketed during the COVID-19 pandemic as people stuck at home had limited entertainment options.

“We have been investing in our game teams, new games, acquiring game companies like Peak and entering new categories like Rollic, the new purchase in China with StarLark is an example of that,” Zynga Chief Executive Officer Frank Gibeau told Reuters.

Rollic, a hyper-casual mobile game developer that Zynga acquired in 2020, has racked up over 1 billion downloads globally from its 15 titles that include the popular game “Hair Challenge”.

But with easing restrictions, people are giving mobile games a miss to step outside their homes.

Zynga lowered its full-year net bookings – an indicator of future revenue – to $2.8 billion from its earlier estimate of $2.9 billion, as user activity fell in the summer.

Reporting by Tiyashi Datta in Bengaluru; Editing by Subrat Patnaik and Shinjini Ganguli