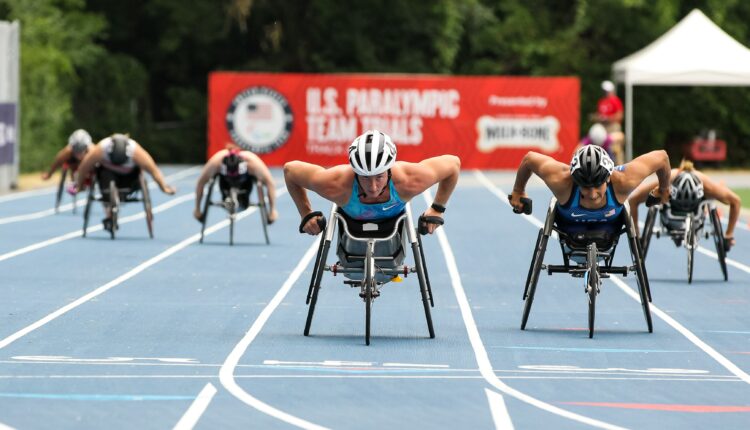 10 Moments at the Tokyo Paralympics We’ll Definitely Be Watching

Continuing the streak of thrilling championships this summer, the Paralympic Games kicked off on Tuesday after a year-long postponement due to the COVID-19 pandemic. Just two weeks after the Tokyo Olympic Games ended—and following tons of amazing performances over the duration of the competition—the best Paralympians from around the world have descended on Japan’s capital city to meet face-to-face five years after the last summer Games in Rio.

Athletes will be contesting in 540 events across 22 sports, including several unique to the Paralympics, such as goalball, boccia, and wheelchair rugby. Team USA, who led the Olympics with 39 gold medals, is looking to make a strong showing in the Tokyo Paralympics as well. After coming in fourth overall with 115 medals in Rio, Team USA is hoping to improve on their standings in Tokyo.

With several highly anticipated matchups, rivalries, and winning streaks on the line, there are many events to look forward to at the Paralympics, which run from Tuesday, August 24 through Sunday, September 5. As for how you can watch all the action at the Paralympics? Tune in across NBCUniversal for television coverage on NBC, NBCSN, and the Olympic Channel, or watch the Games streaming on NBCOlympics.com, the NBC Sports app, and Peacock.

Here’s a breakdown of 10 Tokyo Paralympics storylines we’ll be watching for the next two weeks.

Few competitors have earned the legendary status of Team USA’s Tatyana McFadden. Tokyo is the wheelchair racer’s sixth Paralympics—she debuted at the 2004 Games at the age of 15—and her dominant podium streak has yielded her a total of 17 medals, including seven golds. McFadden has won first-place finishes in distances ranging from the 400 meters to the 5,000 meters—but has yet to earn Olympic gold in the marathon.

McFadden, who trains at the University of Illinois, has 22 World Marathon gold-medal finishes, including wins in New York, Boston, Chicago, and London. She’s slated for five events in Tokyo, but her appearance in the marathon, chasing Olympic gold, is going to be the one to watch.

2. Swim star Jessica Long will compete in her fifth Games.

Jessica Long, the second-most decorated U.S. Paralympian, is scheduled to compete in her fifth Games after earning eight gold medals at the most recent world championships. The 13-time Paralympic gold medalist, who competes in the S8, SB7, SM8 classifications (for swimmers with physical disabilities), won her 23rd Paralympic medal in Rio. That was just the latest in her long career, which started in Athens when she was just 12. (Long picked up three gold medals that year alone.)

One particular event to keep an eye on? The 200-meter individual medley. Long will be defending her title in the event as she strives for her fourth gold medal—she achieved first-place finishes in Beijing, London, and Rio, according to Team USA. Catch Long as she’s slated to compete in five events during the Paralympic swimming session, which begins on August 25 and continues through September 3.

This week Team USA’s David Brown and his sighted guide, Jerome Avery—known together as Team BrAvery—are looking to defend the 100-meter T11 champion title. (The T11 classification is for visual impairment with “very low visual acuity and/or no light perception,” according to World Para Athletics.) Five years ago Brown executed a stunning performance in Rio with a time of 10.99 seconds to win the 100 meters over Felipe Gomes of Brazil.

In 2014, Brown became known as the fastest completely blind athlete in history when he recorded times of 10.92 seconds in the 100 meters and 22.41 seconds in the 200 meters—records which still stand today. The Missouri native seeks to build on those and increase his medal count, which currently includes five world-championship medals and his one Paralympic gold, in Tokyo.

Catch Team BrAvery in action during the track session from August 27 through September 5. The T11 men’s 100-meter final will be held on September 2.

4. A rivalry is brewing on Team USA in T47 sprints.

Americans Deja Young and Brittni Mason are expected to throw down for an exciting sprint competition in the T47 classification. According to World Para Athletics, the T47 classification involves “a unilateral upper limb impairment resulting in some loss of function at the shoulder, elbow and wrist, and which impacts sprints primarily.” Young won the 100 and 200 meters at the Rio Games, but she lost to Mason in both events at the Paralympic Trials this summer. Mason has been on a steady rise in the sport for the last two years; on her way to winning the 2019 world title in the 100 meters, she broke the world record with a time of 11.89 seconds.

Don’t miss the sprint stars, who will face off once again during the track session in Tokyo. The women’s 100-meter final will be held on August 31, and the 200-meter final on September 4.

For the first time ever, badminton and taekwondo will be contested at the Paralympic Games in Tokyo. In taekwondo, Team USA has a couple of medal contenders. On the men’s side is Evan Medell, a 22-year-old licensed diesel mechanic who is ranked No. 1 in the world in the K44 classification (athletes with restrictions on one side in the leg or arm) in the 75kg division after winning titles at the 2019 European and Parapan American Championships. On the women’s side, Brianna Salinaro, also in the K44 classification, will become the first athlete with cerebral palsy to compete in taekwondo on the world Para stage, according to Team USA. Previously she earned bronze in the 2017 World Para Championships.

Watch Medell and Salinaro compete for a podium spot during the taekwondo sessions beginning September 3.

In Rio, Allysa Seely led a historic U.S. podium sweep to highlight triathlon’s debut at the Paralympic Games. After winning gold in 2016, Seely continued her success with an undefeated season in 2018, which included her third world championship title. In 2019 she won an ESPY award for best female athlete with a disability.

After spending several months in the hospital with endocarditis—severe inflammation of the heart—Seely returned to training in the spring of 2021 and made a successful comeback to the sport with a silver medal at the Americas Triathlon Para Championships on June 27.

Watch Seely aim for her second Paralympic gold during the women’s triathlon competition in the PTS2 classification (severe impairments, allowing for prosthesis in bike and run) on August 28.

7. Melissa Stockwell returns to competition after a serious bike crash.

Five years after earning bronze in the triathlon in Rio, Melissa Stockwell is returning to the Games, not only as a flag bearer for Team USA at the opening ceremony but also as a serious medal contender. Her appearance at the Games comes just eight weeks after she suffered a severe bike crash while training and fractured her back. It’s the latest demonstration of resiliency by the Army veteran, who lost her left leg while deployed in Iraq.

But the three-time world champion has made a triumphant return to the sport in the last few weeks and will be ready to compete in the PTS2 category along with Seely on August 28.

8. Multisport star Oksana Masters aims for her first medal in a new sport.

Since making her Paralympic debut in 2012, Team USA’s Oksana Masters has proven to be one of the most versatile athletes in the world. She earned bronze in rowing in London and has gone on to win seven more medals as a cross-country skier and biathlete. She will be competing as a handcyclist in Tokyo after finishing fourth in the road race and fifth in the road time trial in Rio. (Masters is also one half of a Paralympics power couple. Her partner, Aaron Pike, will be competing in Tokyo as a marathoner.)

Watch Masters as she looks to medal in road cycling in the H5 classification (cyclists who sit on their knees and use their arms and trunk to move the handcycle) on August 31 and September 1.

9. Teenagers are leading the way for Team USA.

The U.S. is bringing 19 teenagers to compete across a number of sports. The youngest athlete is 16-year-old Keegan Knott, who will be competing in five swimming events after representing Team USA for the first time two years ago at the Parapan American Games in Lima, Peru.

Ixhelt Gonzalez, 17, is also expected to shine as a member of the women’s wheelchair basketball team. Four years ago she made Team USA’s national roster at age 13 and has since contributed to a sixth-place finish at the world championships in 2018.

Catch Knott when she competes in the swimming program scheduled for August 25 to September 3. Gonzalez and the rest of the U.S. wheelchair basketball team is set to play from September 4 through September 5.

10. Team USA looks to continue its gold-medal streak in wheelchair basketball and volleyball.

Speaking of wheelchair basketball, the men and women of Team USA are looking to defend their place at the top after sweeping the gold medals for the first time since 1988 at the Rio Games. Rose Hollerman, one of three returners on the U.S. national team, will be leading the women’s squad in her third appearance at the Games. In 2019 she was selected as the U.S. flag bearer at the closing ceremony of the Parapan American Games.

The U.S. sitting volleyball team won gold for the first time in 2016 and is returning with nine women from the squad that made history in a sport that made its debut at the Paralympics in 2004. One of those is Heather Erickson, who was named MVP and best receiver at the Rio Games.

Don’t miss the United States as it takes on the world in the wheelchair basketball competition and the sitting volleyball tournament, which both begin on September 4.