For the first time in a decade, Acura, Honda’s pseudo-luxury nameplate, will try to take on the might of the European brands head on. There’s a new TLX in town and it’s wearing a Type S badge, the moniker that Honda only trots out when it’s sure it’s got the competition in its sights.

The centrepiece of this rejuvenation is the Type S engine, a turbocharged 3.0-litre V6. Now, there were rumours that this would be a rejigged NSX affair, but Acura swears up and down it is all new and, for now at least, specific to the S version of the TLX. It is, however, “developed by some of the company’s most experienced powertrain engineers including members of the team that developed the NSX.” The TLX’s version makes do with a single turbocharger, but it does sport double overhead cams and direct injection. This results, says Acura, in the 3.0L Turbo boasting “a more than 50-percent increase in low-end torque.” 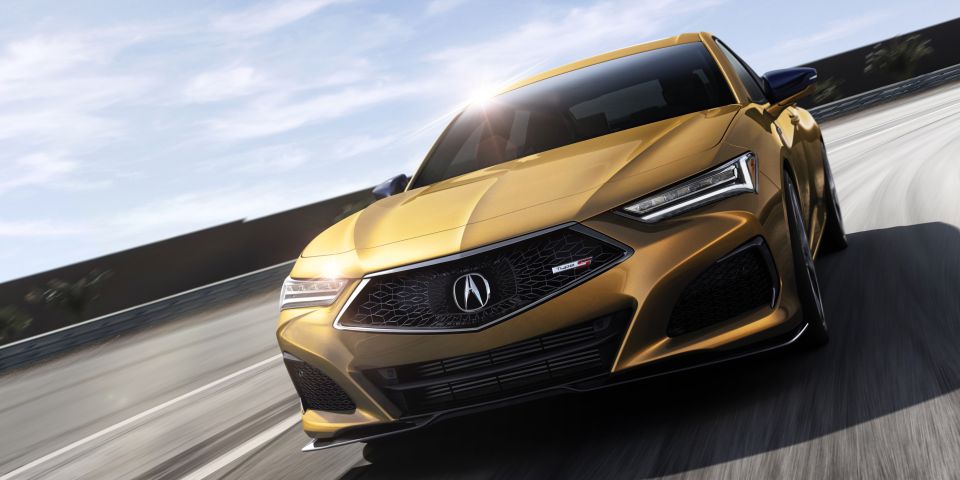 Exactly how many pound-feet of those torque things we don’t know. Nor do we have any horsepower figures. One thing we do know is that initial reports that the engine would have “more than 300 hp” have to be greatly understated. For one thing, if it’s going to keep up with the best BMWs and Mercedes-Benzes of the segment, the Type S will need at least 350 horses to be in the ball park and preferably 375-hp if it wants to be truly competitive. The base engine, a reformulated 2.0-litre four liberated from the Accord, now pumps out 272 horses; 300 or some small increment above that just won’t cut it.

The base engine upgrade is really good news, a true step up from the outgoing model’s naturally-aspirated 2.4L. Not only is it up 66 hp from the previous base engine but it also pumps out 98 more pound-feet of torque. In fact, this year’s base 2.0L twists out 13 lb.-ft. more torque than the 2020’s aforementioned 3.5L V6. In other words, the 3.0L Turbo will have to have some serious moxie if it wants to carve out a substantial niche for itself.

Both engines will be mated to a 10-speed automatic and both will be available with Acura’s trademark Super-Handling All-Wheel Drive system, though it is optional with the four. According to Acura, the fourth-generation SH-AWD system “has 40 percent more rear torque capacity” and can send up to 70 per cent of the engine’s torque rearward in normal driving. It can also transfer 100 per cent of that rear axle power to either the left or right rear wheels.

Handling all this newfound grunt is an all-new, 50 per cent stiffer platform that replaces the previous gen’s MacPherson struts with a double wishbone type front suspension. Meanwhile, the wheelbase is some 95 millimetres longer and both front and rear tracks are wider as well, creeping up a size into the void left by the departing RLX. Surprisingly, despite being wider and longer, the 2021’s EPA passenger volume is but a picayune 0.1 cubic feet larger than the outgoing TLX. That’s probably the result of the sloping roof of the TLX’s new four-door coupe styling. Acura’s says this last is heavily influenced by the gorgeous Acura Precision Concept that was launched at the 2016 Detroit Auto Show, although the production front fascia is nowhere near as aggressive as the show car’s.

nside, there’s a new 10.2 inch touchscreen but with physical power, volume and seek functions — Yay! — while a new True Touchpad Interface allows more accurate swipe zones and handwriting recognition — we’ll believe that when we, um, swipe that. The bass, meanwhile, should be a-booming thanks to Acura’s ELS Studio audio system that features four ultra-slim ceiling-mounted speakers as well as a new Twin Telford subwoofer.

Finally, Acura’s suite of advanced safety and driver-assistive technologies includes Traffic Sign Recognition (TSR), Driver Awareness Monitor, along with Adaptive Cruise Control with Low-Speed Follow, and a Traffic Jam Assist program that is said to reduce driver stress in highly congested traffic situations by helping keep the vehicle in its lane and at a set spacing behind a car detected ahead.

Despite production uncertainties, we still expect the 2021 Acura TLX to arrive in North America this fall, but the Type S is still about a year away, with speculation that it will reach us in spring of 2021.

Billie Eilish – NOT MY RESPONSIBILITY – a short film

How To Remove a Carpet Stain

Where do I get my TINY eggs? | How To Cook That Ann Reardon | Cooking the worlds smallest eggs