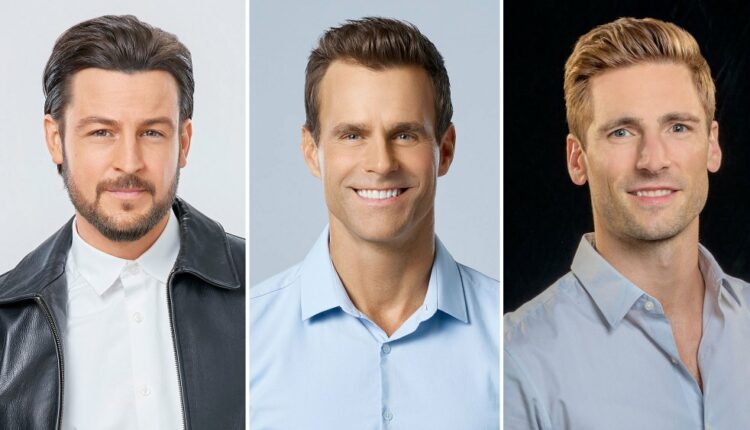 Calling all dreamboats! Over the years, Hallmark Channel has cemented itself as the go-to network for feel-good films, holiday magic and a handsome lineup of leading men.

Whether it’s the hunks from When Calls the Heart — including Paul Greene, Kevin McGarry and Chris McNally — or the Murders and Mysteries franchise heroes, including Niall Matter and Kris Polaha, fans always have eye candy to look at.

Tyler Hynes, for example, has portrayed the perfect suitor in 10 films for the network since 2018. Cameron Mathison, on the other hand, became a staple for Hallmark in 2013 when he started cohosting the talk show Home & Family — in between his role as a detective on the revamped Hannah Swensen Mysteries films.

Candace Cameron Bure has a long history with some of the dreamiest men Hallmark has to offer (as one of the channel’s leading ladies), but there are still a few who she hasn’t fallen for on screen — yet.

“This is exclusive — I’m not going to tell you who it is, but I’m getting [my dream Hallmark costar] for my Christmas movie this year,” the Aurora Teagarden Mysteries star exclusively told Us Weekly in August 2021. “My grandmother’s dream is for me and Andrew Walker to do a Hallmark movie together.”

When it comes to which of her former costars she has the best chemistry with, the Fuller House alum has a lot to choose from.

“Let me start thinking of all my leading men. I do have to say that [I have] a couple of funny ones,” Cameron Bure explained. “Warren Christie, who was in my movie from last year, I loved working with him, and we do have another movie plan that we’re going to work together again. That’s how great it was.”

The Hallmark Channel has also catapulted many of its actors to superstardom through the years, which was the case with Jesse Metcalfe. The John Tucker Must Die star has worked in Hollywood for decades, but his time on Chesapeake Shores gave him an even bigger following.

“Hallmark has been so amazing to me. They’ve just been so supportive and collaborative, and I’ve never really had that with any other network,” Metcalfe exclusively said during an October 2020 appearance on Us’ “Watch With Us” podcast. “They treat their talent incredibly well. So, I love working with them and for them. I’m definitely pretty picky with what I do on the network now. And I’m thankful I have the liberty to do that.”

Although the Desperate Housewives alum announced his exit from the series in March 2021, the network revealed that he will still be a part of its film projects.

“We look forward to continuing to work with him on projects, including original movies on Hallmark Channel,” the network said in a statement to Us at the time. “In addition, we are currently in development on another movie in the [Martha’s Vineyard Mysteries] series.”

Scroll down for your ultimate guide to the Hallmark Channel’s leading men: