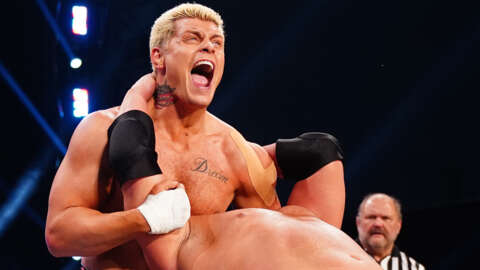 When Cody Rhodes steps into the ring to face Anthony Ogogo at AEW Double or Nothing on Sunday, May 30, he won’t be doing so as the American Nightmare. For one night only, Rhodes will drop the moniker he’s carefully cultivated since leaving WWE in 2016 to, instead, take on the nickname of his dad, the late great “American Dream” Dusty Rhodes.

During a promo on AEW Dynamite on May 12, Rhodes let the world know he was borrowing his father’s identity for one night only at Double or Nothing. Now, in an interview with GameSpot’s , Rhodes has revealed what drove the decision–and pulled back the curtain a little on how he creates his promos in the first place.

“This is probably gonna sound not cool, because a lot of wrestlers–especially wrestlers from my dad’s era–will lie to you and say, ‘Oh, I just came up with that promo right there on the spot,’ which is bulls***,” the former TNT Champion admitted. “But whatever. I workshop my promos heavily for weeks on end. We have a full focus group for them, as crazy as that sounds. This is a data-based company, so I workshop everything I do. And because my promos have been held to a really high standard–people pick at them and find things in them and they put a microscope on them, which I love. With that in mind, when I was doing the promo I couldn’t come up with a finish.”

Without the ending to his promo, Rhodes was at a loss. To him, it would be the same thing as a match with a bad ending. “The match is the promo, the promo is the match,” he said. Then it came to him.

“When I was just thinking about what the story really is, Anthony [Ogogo] is living the American dream for real. All the wrestlers, like Bruno Sammartino, who I referenced in my interview, who have come over, have lived the American dream here,” he explained. “[With] what [that] stands for and [it being] Memorial Day weekend and fans coming back and just all that beautiful synergy and kismet, I ended up saying it once. ‘He won’t be wrestling the American Nightmare. He’ll be wrestling the American Dream.’ And when I said it, I just couldn’t move past it. I thought, ‘That’s it. That’s the ticket.'”

For Rhodes, though, it couldn’t just be a name to throw out there to sell the match. “If I need to do it for a gimmick, it’s the wrong thing,” he said. “But if it’s something that organically exists and comes up and it’s just that name–it’s more thematic and in my soul. Not to get all artsy and whatnot, but if it’s [in my heart] more than it’s [in my head], then it would be worth it and it would feel good. So it really just encapsulates everything that’s happening.”

Of course, taking on his dad’s identity for a night also appeals to Rhodes as a comic book fan. “I’m a big Batman reader and all the characters I love in Batman are all of the screwed up Robins,” he revealed. “Damien’s a killer. Dick is pretty much the only one with his head on his shoulders. Jason, obviously is Red Hood, Tim, etc. They’ve all got problems. And that’s what it’s like being a second-generation wrestler. We’re a bunch of broken toys and this is one of those times where it feels like putting on the cape and cowl. If anyone can do it and do it justice and do it with honor, it could be me. Maybe not full-time and maybe not long-term, but for one night I’ll be the Batman.”

Rhodes’ bout with Ogogo is only one of the high-profile matches at Double or Nothing. The show will also see The Pinnacle and the Inner Circle fighting it out in a Stadium Stampede Match, Kenny Omega defending the AEW Championship against both Orange Cassidy and Pac, and the Young Bucks putting their Tag Team Championships on the line against Jon Moxley and Eddie Kingston, among a number of other bouts.

As for Rhodes, you’ll can listen to his full Wrestle Buddies episode, which touches on the growth of AEW, going back on the road, becoming a father, and so much more, above. New episodes of Wrestle Buddies are released every Thursday on the podcast platform or app of your choice, including , , and . You can also keep up to date with the podcast by following it on @WrestleBuddies.

Got a news tip or want to contact us directly? Email [email protected]amespot.com