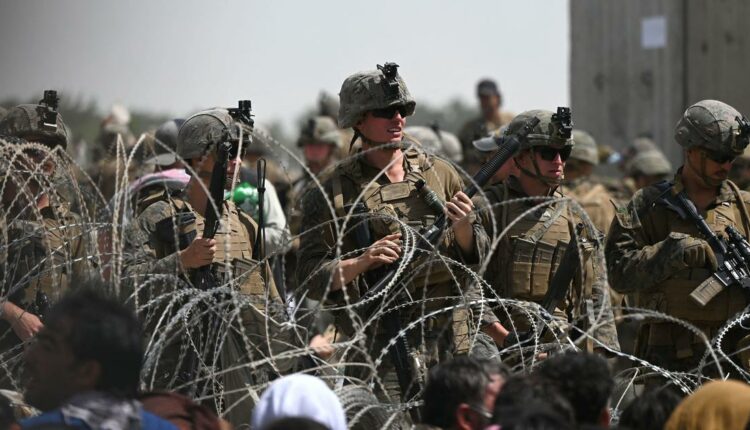 U.S. Defense Department officials say they are trying to evacuate people from Afghanistan “as quickly and safely as possible” as Afghans and Americans continue to rush to Kabul’s airport in an attempt to flee the Taliban, causing chaos and confusion.

Earlier Saturday, the U.S. Embassy in Kabul sent out an alert on its website “advising U.S. citizens to avoid traveling to the airport and to avoid airport gates at this time unless you receive individual instructions from a U.S. government representative to do so” due to ongoing security threats.

A defense official told CBS News that the warning was prompted by intelligence that ISIS-K is planning an attack. With the ISIS threat making it dangerous for Americans to travel to the airport, the U.S. military may have to resort to using helicopters to pick them up at locations around the city, an expansion of operations that could upset arrangements the U.S. has worked out with the Taliban on the ground. President Joe Biden and Vice President Kamala Harris, who is traveling to Singapore but joined via video, met with the administration’s national security team Saturday morning to discuss the security situation in Afghanistan and counter-terrorism operations, including ISIS-K.

Islamic State Khorasan, or ISIS-K, is ISIS’ branch in Afghanistan and Pakistan. The Islamist group is an enemy of the Taliban.

Pentagon spokesman John Kirby did not directly address the embassy’s notice during the Saturday morning press conference, but he did say the Pentagon has received sporadic reports of Americans being harassed and in some cases physically beaten outside the perimeter of the airport. The Defense Department has communicated to the Taliban this is unacceptable, but Kirby said it may be that Taliban fighters are either not receiving their communications or are choosing not to listen.

Despite security threats and chaos at the airport, evacuation flights continued out of the Afghan capital. On Friday, 32 charter planes and six C17 planes carrying around 3,800 evacuees were able to take off from the Kabul airport between several delays due to the high volume of people being processed. Three of those flights landed at Dulles International Airport in Virginia. The Afghans on board will be taken to Fort Bliss, the Defense Department said.

The other planes traveled to Ramstein Air Force Base in Germany and Doha, Qatar, on the Persian Gulf. In Germany, Afghan evacuees can stay at Ramstein for several weeks, according to U.S. military officials. Meanwhile, in Doha, space is starting to become limited. U.S. officials say there’s simply no more room to process them. Al Udeid Air Base hit capacity on Friday, forcing the U.S. to suspend flights for hours out of the Afghan capital until it could find other countries, like Germany, to help transport evacuees.

At the Kabul airport, thousands of Americans and Afghans have attempted to get past Taliban fighters and a crushing crowd, fearing they’ll be left behind without the protection of U.S. troops. Some Afghans trying to get on a flight told CBS News many people who aren’t necessarily in imminent danger have turned up at the airport and they’re getting in the way of others who need to get out.

Major General William Taylor confirmed Saturday that 22,000 people have been relocated from Afghanistan since the end of July – and 17,000 people, including 2,500 Americans, have left since August 14. Although it is unclear how many Americans have evacuated in total, Mr. Biden confirmed to ABC News this week that 10-15,000 Americans remain in Afghanistan.

Austria’s Kurz says he opposes taking in any more Afghans