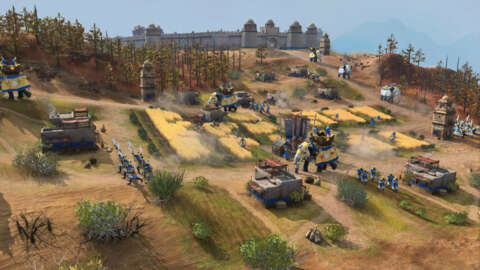 Age Of Empires 4 Will Let You Command A War Elephant

Age of Empires fans have been waiting to return to its history-filled real-time strategy and massive battles for a very long time. Age of Empires 4, developed by Relic Entertainment, will we the long-awaited next game, and a preview event has given us some new information on playable civilizations and improvements–including powerful war elephants. That’s scarier than just about any other weapon you could show up to a battle with.

The Delhi Sultanate will be a playable civilization in Age of Empires 4, and they have access to the massive War Elephant unit, similar to the second game, for causing massive chaos during attacks on fortresses. Sending a few of those through a group of enemy soldiers should be enough to disrupt their lines and let you push deeper into an area.

One of four campaigns available in the game, the Norman campaign begins at the Battle of Hastings in England and follows Duke William and descendants Robert, William II, and Henry I as they fight for control of the nation. This means it will take place over about 100 years, but shouldn’t be confused with the Hundred Years’ War that followed a few centuries later.

There are four Ages in total to play in Age of Empires 4, so the name kind of serves two meanings. Medieval, Feudal, Castle, and Imperial are all available, and in the Feudal Age you’ll be able to play as the Chinese and Mongol civilizations. These require their own tactics, with the Mongols excelling at hit-and-run attacks while the Chinese use technology and powerful defenses.

For more on Age of Empires 4, you can check out the Virtual Village. This gives you quick access to a whole bunch of gameplay videos and a teaser for naval action.

The Legend Of Zelda 35th Anniversary: Our Favorite Games And Why

Sony’s London Studio Is Hiring For PS5 Game, But Is It VR?

Mods Prove Respawn Is 100% Right, Titanfall’s Wallrunning Shouldn’t Be In…

Why Rainbow Six Siege Moved Away From Its Counter-Terrorism Narrative

Who’s Who In Shang-Chi? Every New Character In The…