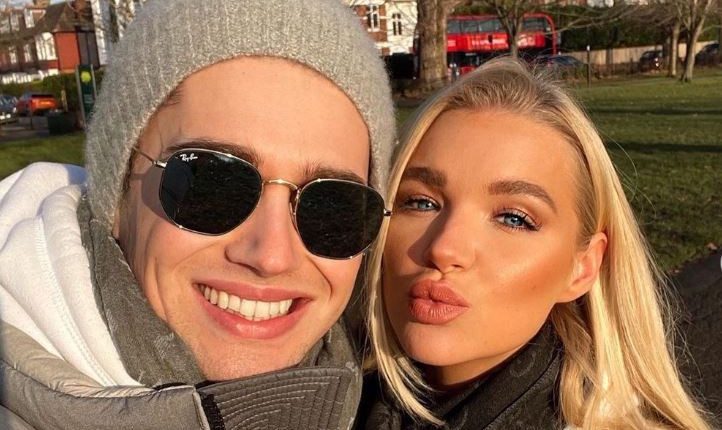 AJ Pritchard’s girlfriend Abbie Quinnen has confessed she feared for their relationship after a horrific fire accident at his flat left her with third degree burns and needing skin grafts.

The couple were filming a ‘life hack’ for their social media followers which went tragically wrong when Abbie’s hair and clothes caught fire.

She was rushed to intensive care and later transferred to a specialist burns unit and has undergone three skin grafts over 20 hospital visits.

The former Strictly Come Dancing star has previously said that Abbie will be left with ‘scarring’ on her body.

Opening up on the terrifying accident, Abbie confessed that the first thing she said to AJ afterwards was if he would ‘still love’ her.

She told The Sun: ‘I saw my life flash before my eyes. I never thought something like that would happen to me.

‘The first thing I said to AJ was, “Is my face going to be OK? Are you still going to love me?”‘

‘I kept repeating this to him and I was shaking in horror.’

She and AJ were trying to film how a glass bottle could be cut in half to be used as a vase with a simple hack. The ‘hack’ involved dipping a rope into a flammable chemical, wrapping said rope around the bottle and then lighting a flame.

The glass, however, exploded when AJ and Abbie had tried to do it and engulfed Abbie’s upper body in flames.

She said: ‘I really need you all to be so careful with what you’re doing & if you are copying any YouTube videos, I will be ok! I love you all!’


MORE : Line of Duty star Martin Compston had doubts drama was going to be a hit: ‘I thought it was too subtle’


MORE : Piers Morgan declares ‘cancel the cancel culture before it kills our culture’

House with a built-in ice cream bar and fizzy drinks tap on sale for £245,000