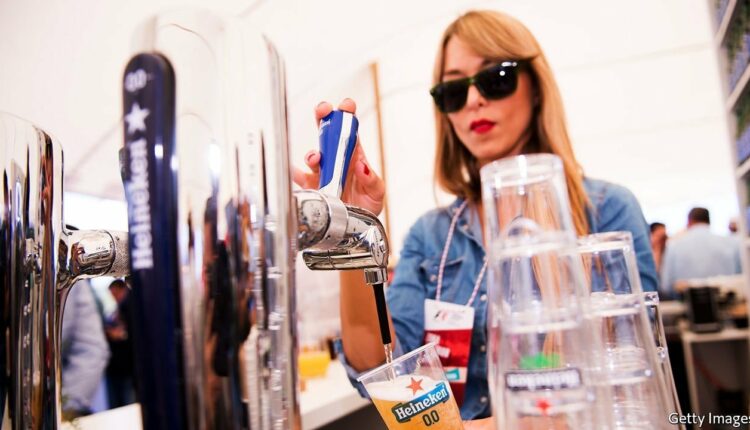 FOR THE 10,000 years or so it has been around, beer has been relied upon both to refresh and intoxicate. Today’s brewers think it could thrive by focusing exclusively on the refreshing. Alcohol-free beer is the booze industry’s latest great hope as sales of the full-strength stuff have stagnated. If Heineken and other brewing giants have their way, tipplers will be knocking back pints from breakfast on.

Beers with no (or little) alcohol have been sold for decades. But even their pedlars admitted they tasted flat. They were aimed at those who craved a proper beer but couldn’t indulge: the pregnant, religious or designated drivers. Multinational brewers saw them as “distressed purchases” and sold them under separate brands far removed from flagship marques.

No longer. Even before the pandemic shut the world’s bars, beer-drinking was on the slide, in part owing to health-conscious millennials bingeing less often. Booze barons concerned about losing sales to soft drinks invested in ways of making alcohol-free beer taste better. This has started to pay off. Though nobody sober would confuse an alcohol-free brew with the real thing, it is now a credible draught. The product is good enough for mega-brands, from Japan’s Asahi to America’s Budweiser (part of AB InBev, the world’s biggest brewer), to offer a “0.0” variant.

Part of the brewers’ interest stems from boozeless beer’s frothy margins. Making the stuff is actually more expensive than making a straight-up Stella. The process usually involves taking a finished alcoholic beer and stripping away the booze (brands guard their methods closely). The expense is, however, more than compensated for by the savings on alcohol excise duties that are no longer owed. It helps that consumers appear to be willing to pay roughly the same price whether a beer contains alcohol or not.

Beer that is entirely alcohol-free continues to be niche. “At the moment, alcohol-free beer is still something you drink when you can’t drink,” says Trevor Stirling of Bernstein, a broker. Only 2.4% of beer sold globally this year will be non-alcoholic, according to Euromonitor, a research firm. Still, that is up from 1.5% a decade ago, in part because traditional beer has slipped. Much of the growth in 0.0 sales has come from places that consume lots of beer already, notably Europe.

The aim for brewers is therefore to reposition their virtuous offerings not as beer at all, but as a premium soft drink for grown-ups. That would give them a toe-hold in a business that is, by volume, nearly four times as large as beer.

Indeed, many brewers believe that their booze-free products can refresh the parts of the market regular beers cannot. Bram Westenbrink of Heineken says only a fifth of its 0.0 drinkers would otherwise have plumped for a normal beer. The Dutch giant has pitched its alcohol-free brand as a suitable tipple for the office, gym and car. (It is also targeting more traditional beer-drinkers by sponsoring the European football championship now under way.)

The beer giants also think their investments in deboozing give them an edge over upstart rivals. Craft brewers, which have thrived in recent years, work in small batches for which stripping away alcohol is uneconomical. Their hoppy flavours rely on plentiful alcohol content to satisfy drinkers, unlike the blander lagers that dominate supermarket shelves. AB InBev is aiming for at least 20% of its sales to come from no- and low-alcohol beers (typically below 3.5% alcohol by volume) by 2025, triple the current share. Heineken already has 130 0.0 products in its range.

Governments and socially minded investors like to see beermakers offer alternatives to alcohol. Far from damaging a brand, having a 0.0 product is now a signal of a mature marque. Brewers have long tried to shift perceptions of beer as a laddish 1980s drink, fit only for football fans looking to get bladdered. Craft beers were one way to do that, but often turbocharged hangovers because of their high alcohol content. Now the industry is going the other way. How refreshing. ■

3 Strategies to Address Political Polarization in the Workplace

8 Steps for Building a Culture of Data-Driven Empathy

A Better Approach to Group Editing

Technology unicorns are growing at a record clip

What Emergency Responders Can Learn from the Business World

Breaking Free from a “9 to 5” Culture

Digital Transformation is Incomplete Without the Connected…

Who Writes the Rules of a Blockchain?