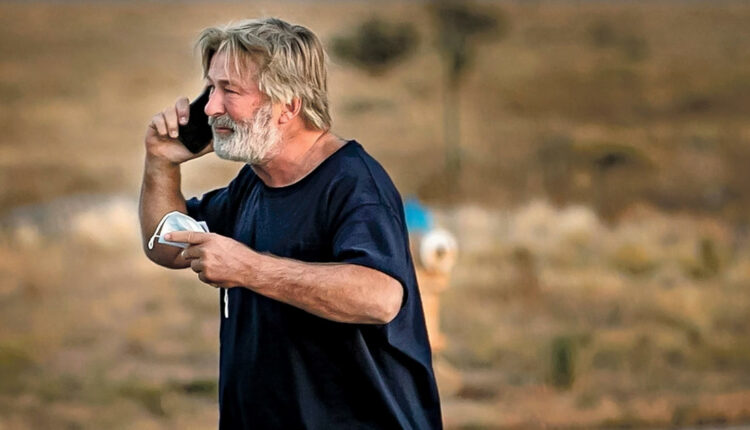 A distraught Alec Baldwin lingers in the parking lot outside the Santa Fe County Sheriff’s offices on Camino Justicia after being questioned on October 20, 2021, about a shooting when a prop gun misfired earlier in the day on a local movie set.

One person was killed and another was wounded after Alec Baldwin’s prop firearm discharged on the set of the movie “Rust” on Thursday, according to the Santa Fe County Sheriff’s office. Baldwin is starring in and co-producing the Western film.

“The sheriff’s office confirms that two individuals were shot on the set of Rust,” the sheriff’s office said in a press release late Thursday. “Halyna Hutchins, 42, director of photography and Joel Souza, 48, director, were shot when a prop firearm was discharged by Alec Baldwin, 68, producer and actor.”

Hutchins was transported to the University of New Mexico Hospital via helicopter where she died of her injuries. Souza was taken to Christus St. Vincent Regional Medical Center and was being treated for his injuries, the sheriff’s office said.

The incident remained under investigation and no charges had been filed.

A distraught Alec Baldwin lingers in the parking lot outside the Santa Fe County Sheriff’s offices on Camino Justicia after being questioned on October 20, 2021, about a shooting when a prop gun misfired earlier in the day on a local movie set.

In a statement posted to Twitter by the Screen Actors Guild – American Federation of Television and Radio Artists, President Fran Drescher and National Executive Director Duncan Crabtree-Ireland said they were “devastated by this tragic news,” and voiced their sympathy with the victims’ families.

“This is still an active investigation and we do not yet have all the facts,” the SAG-AFTRA leaders said the union would “continue to work with production, the other unions, and the authorities to investigate this incident and to understand how to prevent such a thing from happening again.”

In 1993, actor Brandon Lee, son of martial arts icon Bruce Lee, was killed while filming for “The Crow” when a firearm used on set discharged a .44 caliber round, meant to be a blank, that struck his abdomen.

This week on “Sunday Morning” (December 5)