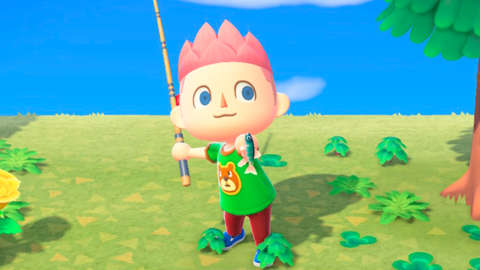 February has arrived, and that means some new bugs, fish, and sea creatures have begun appearing in Animal Crossing: New Horizons. As was the case in January, players with Northern Hemisphere islands will find very few new critters this month, but those with Southern Hemisphere islands will be able to catch a couple of new insects and fish right now.

You can see all the new bugs, fish, and sea creatures that are available in February below. Be sure to also check out our dedicated fish guide, bug guide, and sea creatures guide for more details on all the critters in the game, as well as tips to help you catch them and complete your collections.

Now that February is underway, a few new seasonal items are available in Animal Crossing: New Horizons, including a couple for Valentine’s Day. Nook’s Cranny and the Able Sisters are also selling special furniture and clothing right now for the Festivale event, which was added as part of the game’s free January update. That event falls on February 15 and is hosted by Pave, the dancing peacock. Animal Crossing’s next big update is slated for March and will add some Mario-themed furniture.

No new fish are appearing in Northern Hemisphere islands this month, but a few are disappearing soon. The bitterling, football fish, sea butterfly, stringfish, and sturgeon are all leaving the game in March, so you’ll want to use this chance to catch them while they’re still available.

Only one new bug is appearing in Northern Hemisphere islands this month: the returning Tiger Beetle, which will be available through October. As far as bugs go, it’s decently valuable: you can sell it for 1,500 bells at Nook’s Cranny.

As was the case with fish, no new sea creatures are appearing this month in Northern Hemisphere islands.

Only three new “fish” (of sorts) are appearing this month in Southern Hemisphere islands, and they’re all worth a nice chunk of change. The moray eel and ray can both be found in the ocean, while the soft-shelled turtle can be fished up out of the river.

Two new bugs are available this month: the rice grasshopper and the walker cicada. Both, however, are only worth a few hundred bells, so they’re hardly worth catching unless you’ve yet to donate them to your museum.

Only a single new sea creature is appearing around Southern Hemisphere islands in February: the flatworm. It’s only worth 700 bells, so there isn’t much incentive to seek it out unless you’re looking to complete your collection. As with other sea creatures, you’ll need to have a wetsuit to go diving for the flatworm.