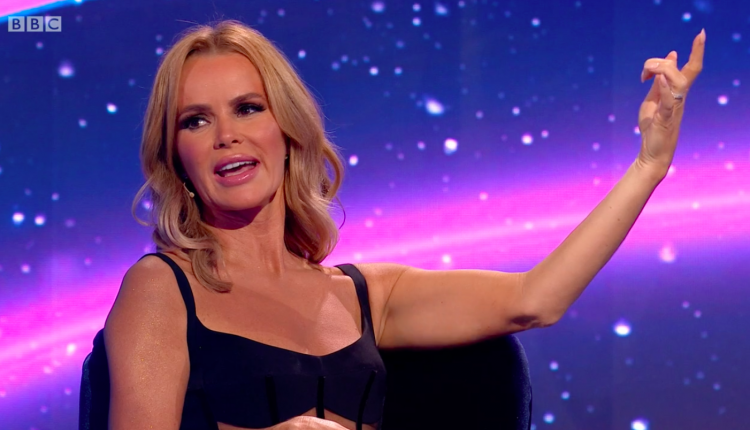 Amanda Holden makes X-rated hand gesture on I Can See Your Voice: ‘This is a family show!’

Amanda Holden left her I Can See Your Voice co-stars red faced on Saturday night after things took an unexpected turn.

The actress accidentally made an X-rated hand gesture when talking about a violinist who appeared on the show.

She starred alongside Jimmy Carr, Alison Hammond and guest singer Ricky Wilson on Saturday night’s programme and the gaffe came while discussing a singer known as Songbird, who played a number of instruments.

Jimmy said: ‘Did you name this lady? “She’s a lady that can sing, Songbird, we’ll call her Songbird.” You said she was a multi-instrumentalist?’

After host Paddy McGuiness confirmed she was, Ricky questioned whether or not she’d mimed playing a violin during her time on stage.

‘We didn’t have a close up of her fingers when she was playing the violin!’ he said.

Then, Amanda accidentally made a rather rude gesture after miming playing the instrument herself.

She said: ‘She wasn’t doing that with her fingers.’

The action left her co-stars in hysterics after the gesture, leaving Ricky and Alison crying with laughter.

‘You know what I mean though, when her fingers shake on the violin,’ Amanda said.

‘We all know what you mean but let’s get back to the singing,’ Paddy joked, getting the show back on track.

The judges guessed correctly too, Songbird, real name Tori Baker, was revealed as a bad singer.

The show, which is based on the format of a South Korean programme, sees the celebrity panel attempt to eliminate bad singers from a group of six people based purely on instinct.

Each episode features six mystery singers, with contestants working with the celebrity judges to win a cash prize.

I Can See Your Voice has reportedly been renewed for a second series after enjoying a ‘runaway success’ on BBC One.

I Can See Your Voice is available to watch on BBC iPlayer.

Over 3.3M VW customers have had their personal details exposed