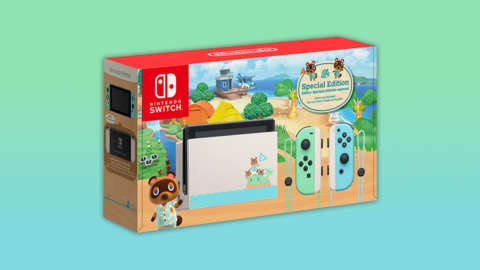 Update: Nintendo has officially confirmed the Animal Crossing: New Horizons edition Nintendo Switch will be restocked at some retailers in the US, and it’s finally happening. Right now, you can buy the special-edition Switch online at nearly all major retailers. Check out where to buy the Animal Crossing Switch below.

If you missed your chance to snag the limited-edition Animal Crossing Nintendo Switch back in March, you may have another shot at buying it in the near future. A recent tweet from the Nintendo Australia and New Zealand Twitter account announced an upcoming restock for that region, and today the special-edition Animal Crossing Switch has restocked–and then sold out–a couple of times at EB Games Canada. It’s unclear if more stock is on the way to US retailers, but you should keep your eye open just in case.

Earlier this week, Nintendo’s American social media accounts made posts on both Facebook and Twitter, saying a “limited shipment” of the Animal Crossing Nintendo Switch would return to stores, according to deals insider Wario64. Those posts were deleted soon after, so there’s no confirmation yet of an official restock in the US. However, with today’s restock in Canada, it seems like America could be next, and some people on Twitter are already reporting finding the Animal Crossing Switch in stock at brick-and-mortar stores in the US like Target and Fred Meyer.

The potential of an Animal Crossing Switch restock comes in the midst of people scouring the internet for PS5 and Xbox Series X/S preorders. Both consoles became available for preorder over the past week and some, and both sold out very quickly–but not without some madness. PS5 preorders went up without warning, while the Xbox Series X/S’s scheduled and organized preorder plan caused retailer websites to crash and stop working from an overwhelming amount of traffic. More preorders for both consoles are expected, including a PS5 preorder restock at GameStop this Friday, September 25.