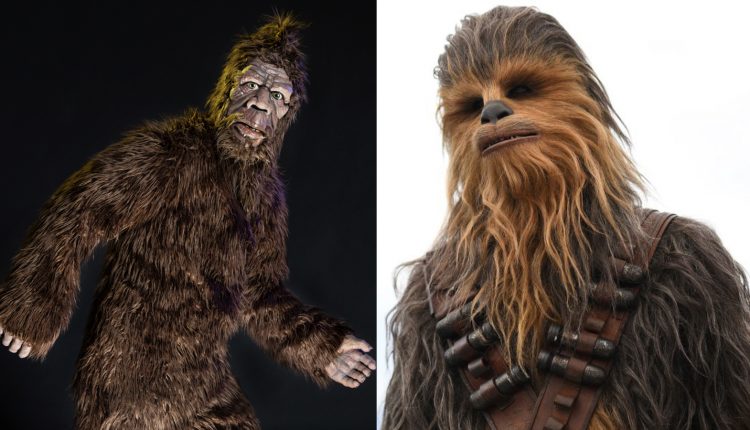 “Is that Bigfoot?” asks your dad, when Chewbacca appears onscreen.

You’ve told your dad about Chewbacca before. He’s seen the action figure. For that matter, he’s seen actual depictions of Bigfoot before on “In Search of” and “The Six Million Dollar Man,” so your dad should know better.

“He looks like a Bigfoot,” Dad contends, walking out of the room.

And you can only sigh.

That was more than 36 years ago. Today, with eight more films in the series released, you reflect on your dad’s confusion and you can’t help but wonder: What IS the connection between these two, towering beastmen?

“Bigfoot,” of course, is another name for Sasquatch, a folkloric North American being said to resemble a shaggy, upright ape. The creature has roots in the folk beliefs of various native North American tribespeople and is part of a familiar trope in global folklore: the beastman, a form neither entirely human nor entirely animal that inhabits the wild, untamed and sacred parts of the world. In modern times, Bigfoot has also come to symbolize a longing for the unexplored and an embodiment of environmental concern. It’s also a frequent obsession of pseudoscientific investigation and unsubstantiated sightings.

Wookiees (like Chewbacca), at least within the lore of “Star Wars,” have nothing to do with Earth. It’s a galaxy far, far away, remember? As we know from 1978’s “The Star Wars Holiday Special” and subsequent treatments, the Wookiees hail from the forest planet Kashyyyk. While many observers mistake them for a primitive species, the Wookiees boast both a rich culture and an aptitude for advanced, spacefaring technology. They fought in one of the final, crucial battles during the Clone Wars, and Chewbacca became a prominent rebel hero during the Galactic Civil War that followed.

Cryptids, Lemurs and Dogs: A Hairy Origin Story for Chewie

It’s perfectly reasonable to wonder if the Wookiee we meet in the 1977 film “Star Wars: Episode IV – A New Hope” was in some way inspired by the concept of Bigfoot, which had certainly gained a foothold in popular culture by that point. Let’s see if the evidence matches up.

For a detailed breakdown of the Wookiee’s origins, there’s no beating Michael Heilemann’s Kitbashed.com article on the topic. The author points out that “Star Wars” creator George Lucas himself has frequently cited his dog Indiana as an inspiration. Indeed, Chewbacca has sometimes been described “an upright dog” or “the dog who is allowed to have a gun.”

But of course Lucas brought in additional creative minds to bring his universe to fruition, including illustrator Ralph McQuarrie who created the poster art for the 1972 Arkansas Bigfoot film “The Legend of Boggy Creek,” as well as its 1984 sequel. But in designing Chewbacca, Lucas asked McQuarrie to create something like “a lemur with fur over his whole body and a big huge apelike figure,” writes Heilemann.

If you look back at these early character concepts, the lemur qualities are undeniable. While this concept never made it to the screen in the original “Star Wars” trilogy, the concept would go on to influence the design of the Lasat alien species, which debuted in the 2014 animated series “Star Wars Rebels.”

Instead, Lucas came back to McQuarrie with an inspiration image: an illustration of a “jaenshi” by John Schoenherr for a George R.R. Martin short story in a July 1975 edition of “Analog.” Yes, the future author of “A Game of Thrones” is a small part of Chewbacca’s history. As Heilemann explains, McQuarrie tweaked the image and combined it with preexisting aspects of Chewbacca character design. While the result was still a bit rough compared to the cinematic Wookiees we all know and love, the design essentially is all there.

Heilemann goes into greater detail about this design process and some of the conflicting accounts about it, but contends that the changes ultimately achieved a “softening” of the visual design to reflect script changes that, through the course of multiple rewrites, saw Chewbacca evolve from a jungle barbarian to Han Solo’s smuggling partner.

None of this points to any direct links between Bigfoot and Chewbacca, but the Bigfoot craze of the 1970s is undeniably part of the pop culture stew from which these various ideas emerged. They’re both portrayed as creatures suspended somewhere between human and beast, embodying both the natural serenity that we aspire to and the bestial violence inherent in our nature. Chewbacca is a big sweetheart, but we also know he might rip your arms off if you beat him at Dejarik. Likewise, tales of Bigfoot encounters range from episodes of natural wonder to wild danger.

Still, Dad was clearly wrong. Chewbacca is no Bigfoot.

Karen Carney column: What Jude Bellingham can bring to Dortmund

Becoming a Nurse on a Budget: Money-Saving Strategies and Funding Options to Consider

At Home Learning 101: How To Get The Most Out Of It

6 Tips for Becoming a Great Tutor to Kids

Encouraging Teachers of Color to Become Superintendents According to Dr. Shawn Joseph