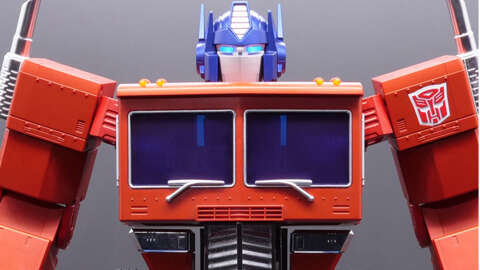 Can’t find a PS5 or Xbox Series X but have the money to spend? Why not use it on an Optimus Prime figure that transforms itself? Hasbro announced the high-tech robotics toy at Hasbro Pulse Fan Fest, the company showcase of its upcoming lineup. The Optimus Prime Auto-Converting Programmable Advanced Robot – Collector’s Edition is available to preorder for $700. It’s estimated to ship on August 2.

The collectible is the result of a partnership with Robosen Robotics. Hasbro says the Optimus Prime can automatically convert between vehicle and robot form, race in its vehicle form, walk in its robot form, and respond to control commands by voice or mobile app. It will respond to voice commands like “Roll Out,” “Convert,” and “Attack.” It also features programmable tools for you to make your own functionality. This is what you probably wanted to actually own when you were a little kid with a cheaper toy.

The figure measures 19 inches tall when in robot form and includes a rechargeable lithium-ion battery. Plus, it is still a toy after all, so it comes with a battle axe and blaster, along with a charging cable and travel case. It’s based on the G1 (original) Optimus Prime look.

“We are thrilled to collaborate with Hasbro and look forward to ushering in a new standard of robotics with the most advanced Transformers robots for consumers ever created,” said Robosen USA director Sean Tang. “The team is working hard to deliver an amazing user experience for fans of this esteemed franchise and produce Transformers that will be a premium addition to their collection with its superior functionality.”