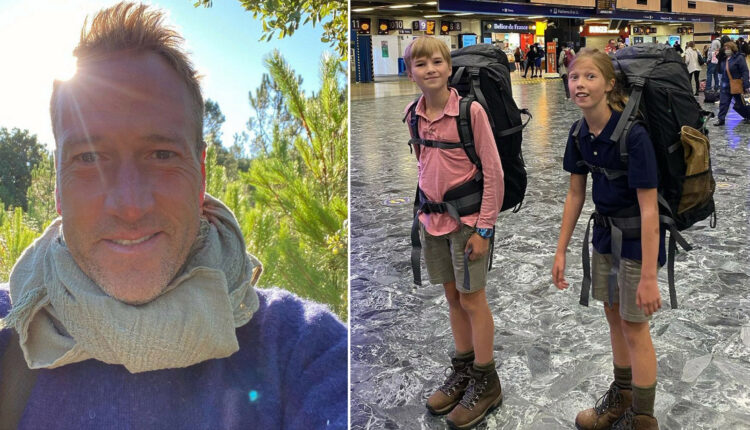 Ben Fogle shares joy as his young children go on expedition without him to gain ‘absolute independence’: ‘It’s up to them to stand or fall by their own mistakes’

Ben Fogle hopes his young children gain ‘resilience and resourcefulness’ as they head off on an expedition of their own.

The adventurer, 47, waved off son Ludo, 11, and daughter Iona, 10 at the train station on Monday as they went to explore the Inner Hebrides for a week, and understandably he was ‘bursting with pride’.

The pair will not be taking phones, tablets, computer games or any other form of electronic entertainment, so contact will be minimal. However Ben and his wife Marina will be busy watching their new two-day-old puppies to hopefully take their minds off an empty house.

He shared a snap on Instagram of the kids at London Euston station with their bags packed, containing all the essentials – a lot of it from Ben (‘Whether they’ll use it in the right way is another thing’ he laughed).

In the picture caption he wrote: ‘I am bursting with pride as Ludo and Iona head off on their first big island adventure together to the Inner Hebrides.

‘When I was eight years old, I went on a trip to the island of Eigg (a visit that would change my life) and now these two are off with their adventure club and some friends on their own island expedition.

‘I was quite teary as I waved my young explorers off…’

The New Life in the Wild star sees the expedition, and all the midges and mud that comes with it, as a bonus for Ludo and Iona’s development.

He told Metro.co.uk: ‘I think it’s about resilience, and resourcefulness. They’re on their own, I can’t do their laces, I can’t ask if they’ve brushed their teeth, or ask them to change their clothes if they’re all muddy. It’s that moment of independence,’ he said, ‘and for me, independence is such an important thing.

‘If you look at the pandemic, it’s so overwhelmingly passive in all of our lives, we’ve kind of almost lost our independence, and what I love is that the children will have absolute independence. It’s up to them to stand or fall by their own mistakes.’

Ben added that their trip, which they are taking with teachers and friends, could give them something more valuable than a classroom education could.

‘As a father who has embraced risk in all shapes and forms over the years, I feel that this is what children need,’ he shared.

‘No disrespect to education but I’ve said on record before that I don’t believe traditional education in terms of learning in a classroom, taking exams to see whether you’re going to succeed or fail in life, is a good marker of success.

‘I personally think that someone who can get through a week on a Scottish Island without getting pneumonia, or without getting stuck waist deep in a bog is a sign of success on equal part to being able to spell.’

‘It’s quite a big deal for a 10 and 11 year old to head off for a week camping in the Scottish islands, but that’s why I’m so proud because I really I know how life changing these experiences can be.’

He added that Ludo and Iona ‘needed’ the trip having been in lockdown for over a year due to the pandemic, saying that parents shouldn’t assume children will simply bounce back from it.

‘We need to rebuild their confidence in a world where people jump out of the way because you get too close to them, or look at you because you’ve coughed.’

‘I think the symbolism of two young children just heading off on a good old fashioned Swallows and Amazons adventure is what kind of everyone needs.’