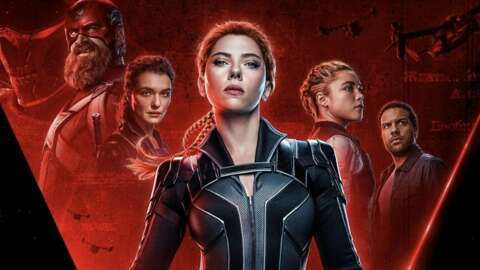 Black Widow is releasing in July–both in theaters and via Disney+ streaming–after several delays, and the movie’s latest trailer gives us a hint at Natasha Romanoff and the family, sort of, that she had before becoming an Avenger. We also get to see the menacing Taskmaster in action, albeit only briefly.

“You don’t know everything about me. I’ve lived a lot of lives before I was an Avenger,” Scarlett Johansson’s Romanoff says in the trailer. “Before I got this family. I made mistakes choosing between what the world wants you to be and who you are.”

The trailer shows how Romanoff will need to examine her past, showing a younger version of the character briefly before an adult Romanoff and Yelena Belova (Florence Pugh) confront each other and gunpoint and engage in close-quarters combat.

We also get a brief look at David Harbour’s Red Guardian, who praises his girls’ abilities before an action sequence culminates in a car chase. That’s where the bow-wielding Taskmaster makes an appearance, firing an explosive arrow that lands under a car and sends Romanoff flying into the air.

“One thing’s for sure: I’m done running from my past,” she says as she skids down a skyscraper.

Black Widow releases June 9. This will be over a year past its original May 2020 release window, which was delayed multiple times due to the COVID-19 pandemic. It’s a little over two hours, so you can probably make it through the film without a bathroom break, unlike the last few Avengers movies.