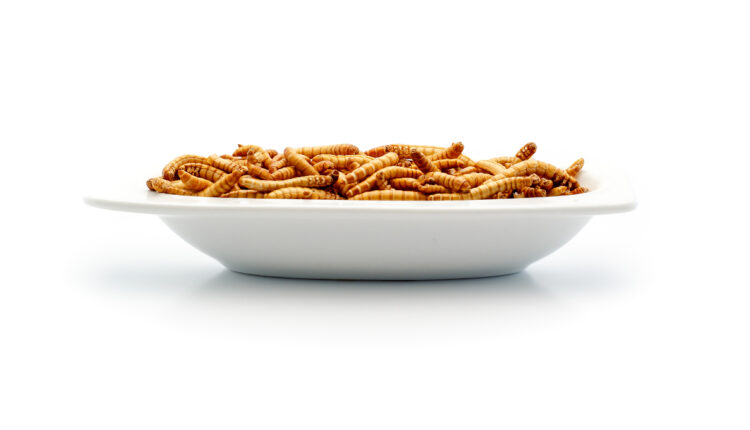 Mealworms could be hitting restaurants and supermarkets in products like burgers, pasta and even as snacks coated in chocolate in the relatively near future in some areas.

There are no known cases of transmission of diseases or parasitoids to humans from the consumption of insects, on the condition that the insects were handled under the same sanitary conditions as any other food, according to the Food and Agriculture Organization of the United Nations.

Currently it is only legal to sell mealworms in a dried format, but companies are already getting creative with this novel ingredient.

The approval for this product was pushed through by the French company Ÿnsect, which received $372 million in funding to create the world’s largest insect farm. The 100,000 tons of mealworm the company plans to produce annually, will be used for wet pet food, as well as human protein products as an alternative to whey protein, according to Forbes.

Can consumers get over the “yuck factor” and embrace insects as a new environmentally friendly protein source?

Entomophagy is the practice of humans eating insects. It is carried out by about a quarter of the world’s population. In some places, insects are considered to be delicacies. Chefs and food companies in Europe are currently working to develop products incorporating the creepy crawlies that will appeal to the western pallet.

Production of mealworms
Yellow mealworms can be produced for consumption in two ways. Historically insects have been caught from the wild to consume. In the EU we don’t have a large enough number of insects for this method of production for it to be viable. There is also the question of how to ensure that wild-caught insects are safe for consumption.

The second option is to farm the insects. Through farming, governments can regulate what the mealworms are fed and prevent them from being exposed to harmful chemicals such as pesticides. Farming the mealworms as mini-livestock allows the insects to be bred without disrupting the wild insect population.

The EU has only approved mealworms that come from a select number of countries.

To harvest the mealworms, firstly, the eggs are separated from the breeding beetles by a sieving process. Mealworms are often fed wheat flour or bran by farmers, but the worms can live on an omnivorous diet. When the larvae have reached the desired size, they are washed with water before being boiled, which kills the mealworms. They are then dehydrated, usually by baking or frying, and are ready for human consumption.

Yellow mealworms can be sold whole as snacks, or ground into a powder.

One key difference in the production of insects in comparison to other livestock is the fact that insects are normally consumed whole with no part of the mealworm removed. Because of their small size, it can be hard to decontaminate the insects if they are contaminated by either the food they are given or by other materials that they come into contact with. This is why regulations around the housing of the mealworms is so important, particularly the materials used for such housing.

Safe preparation and allergens
Because mealworms are still a new product within the Western food market, there isn’t as much research on them as a human food products as there is with more established food products, like meat. The studies that have been conducted show that the standard practices around safe food handling and preparation should be carried out when preparing insects, but its not yet clear whether commercial food safety best practices need to be tweaked for this new food type.

The risks of insects passing pathogenic microbes to humans is considered to be very low, at least compared to meat and poultry, which can carry pathogens such as E. coli, Salmonella and those related to bird flu and mad cow disease.

However, insects such as mealworms can be a vector for microorganisms that are detrimental to humans. Some microbes are part of the natural lifecycle of the insect, while others get picked up through contact. The best way to safeguard against harmful microbes is through controlled, hygienic farming conditions.

Insects can also carry food poisoning bacteria in the same way as other food products do. This bacterium can be picked up at any stage of the supply chain. Insects that have been left to air dry, rather than being roasted or fried, carry a higher risk of contact with harmful bacteria. Therefore, it is important that mealworms are sourced from reputable suppliers approved by the EU.

Allergens are another issue that needs further research. Allergens are triggered by proteins and more research into the possibility of consumers reacting to these yellow mealworms is needed. People who have allergic reactions to crustaceans and dust mites have been found to also have reactions to other insects.

It might be also possible that allergens in the insects’ feed on can be passed onto the consumer, for example, if the mealworm was fed on wheat, someone with a wheat allergen might react unfavorably after ingesting the little critters because anything that’s in the worm’s gut will too end up in the humans gut. But this still needs further research. For this reason, it is important to be vigilant when dealing with this new ingredient and find out what the mealworms were fed with.

Nutrition and environment
Mealworms contain high-quality protein, vitamins and amino acids. The health benefits of mealworms equate to that of meat or fish. They contain monounsaturated fats and omega 3 fatty acids which are essential parts of a healthy, balanced diet. There have even been studies to show that consuming insect protein could reduce cholesterol.

Insect consumption is far more ecofriendly than meat consumption because insects consume less far less resources. One study showed that crickets need six times less feed than cattle to produce the same amount of protein. Insects are also more efficient at turning food into nutrients for human consumption than other forms of livestock. Insects convert 2kg food into 1kg of usable insect mass, whereas cattle require 8kg of food per 1kg of body weight gain. This means we now have a lean protein source that literally doesn’t cost us the earth.

New product development
Along with new food safety guidelines, adding mealworms into the diets of European consumers is an innovative step in the right direction. The dried mealworms are said to have a peanut like flavor. This, along with the dried mealworm’s crunchy texture could lead to them becoming a nutritious and healthy snack. European companies are getting creative, now with chocolate covered mealworms, and staple favorites like BBQ and Peri Peri to appease the western take buds. Mealworm powder is already being used to make insect pasta and burgers.

Studies show that mealworm protein matches the quality of milk protein, making it a great alternative for high protein fitness products like shakes and bars.

With so many great benefits to mealworms, they seem like a no brainer. But before we in the West can fully embrace the benefits that this new food type has to offer, public perception around insect consumption would need to evolve.

About the author: Katharine Hopkins has a BSc (2:1) in Food Marketing Management from Sheffield Hallam University. For her year in industry as part of my course, she worked in NPD for M&S and Bakkavor. After graduation she worked for Speedibake (part of Associated British Foods) for one year in NPD. She then went on to do NPD for Premier Foods for two years. Currently she is a bakery manager at Seven Hills Bakery in Sheffield, England.

Melissa Joan Hart Is ‘Disappointed’ in Herself After…