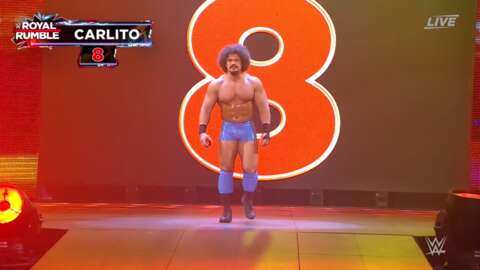 Now that was cool Carlito Caribbean Cool returned at Sunday’s WWE Royal Rumble event. He arrived at entrant #8 brandishing an apple that was certainly used almost immediately upon entering the ring, showing he’s still very much bad to the core.

In March 2014 Carlito’s father, Carlos Colon, was announced as a WWE Hall of Fame inductee as part of that year’s class. On April 6, he joined other members of his family in the actual induction ceremony and the first time he had been on WWE television in four years.

Carlito has also made appearances in Netflix’s Glow as a trainer and brother to Britney Young’s Carmen. Carlito is just the most recent addition of the surprising entrant’s in this years’ Rumbles. Just comes to show anything can happen…including the WWE Universe getting trolled by one of its own.