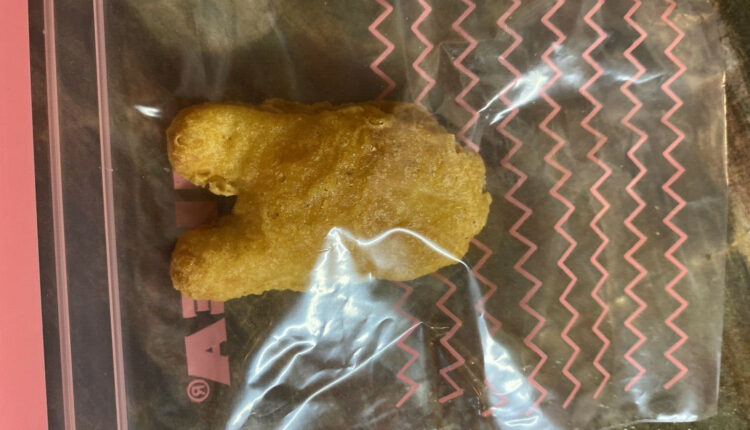 Chicken McNugget-shaped Among US character sells for almost $100,000 Well, this one is surprising.

A Chicken McNugget shaped like a character from popular “suss” accusing game Among Us, has sold for an astounding $99,997 USD (roughly $120,821 CAD). Yes, you read that correctly — a single McDonald’s McNugget sold for nearly $100,000 USD.

The bite-sized piece of food received 184 bids on eBay and was listed under the title, ‘McDonald’s Among Us shaped Nugget from BTS Meal.’ For more on McDonald’s mythical BTS meal, follow this link.

Somehow, the lucky McNugget managed to still sell for such a ridiculous amount despite its opening bid on May 28th starting at just $0.99.

The seller, eBay user ‘polizna,‘ claims the nugget will be delivered in a frozen and air-sealed case to ensure its freshness. McNuggets typically expire after 14-days.

As of right now, it’s unclear who the buyer is or if the deal will actually go through. Part of me thinks this is really just an elaborate joke, but if it turns out to be a legitimate sale, I hope whoever purchased the Among Us McNugget enjoys their costly one to two-bite snack.

Amid the ongoing COVID-19 pandemic, Among Us exploded in popularity, hitting nearly half a billion users worldwide. The game’s goal is to deduce who the murderer is on a spaceship while attempting to point the finger at other players if you happen to be selected as the killer.

In other thing-sold-for-way-to-much-and-this-makes-no-sense-news, an Italian artist sold an invisible sculpture for €15,000 (about $22,123).

Today only, give Dad Braun’s Series 9 wet/dry shaver for $80 off

21 Tummy-Control Dresses for Spring and Summer — Under $40!

Answering your burning question: How long do solar panels…

Moonshine, an American invention, carves a path on the right…

Should you buy an iPhone 12 even though Apple’s new…