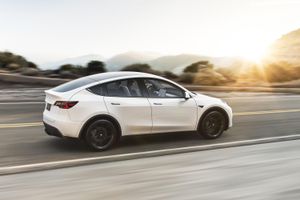 Tesla’s been hard at work getting its Chinese Model Y production up and running at the massive Gigafactory complex outside of Shanghai, and now, according to a report published Thursday by Reuters, that hard work has paid off.

Climb in the driver’s seat

Subscribe to Roadshow’s newsletter for the latest car news and reviews, delivered to your inbox twice weekly.

Tesla’s pricing strategy for Model Y in the world’s largest market for cars is simple: undercut the other guys. That’s why Model Y will be slightly cheaper than offerings from Nio, for example, which retails for the equivalent of $56,329.

Interestingly, while Tesla’s Model 3 gets the benefit of China’s electric vehicle subsidy, Model Y doesn’t qualify because of its price. It’s also not totally clear whether there are plans in the works to equip the Model Y with the base Model 3’s cheaper lithium-iron-phosphate battery cells, which would, in theory, bring the price down.

Since Tesla doesn’t have a PR department, I tweeted at Elon Musk about this, but I’m not holding my breath for a response.