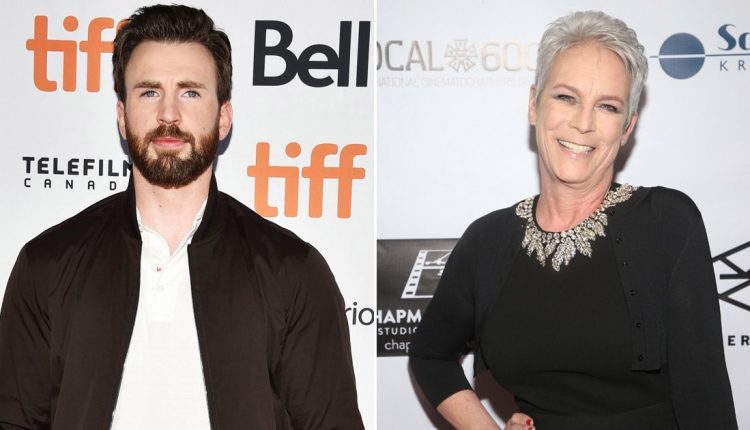 The Captain America star poked fun at what happened in a tweet on Monday, after appearing to accidentally share an explicit photo on social media.

And Jamie, who played his mother in their hit murder mystery film, was on hand to share a message of support and praise for how he’s handled the situation.

The legendary actress wrote: ‘My boy! Proud of him. Got MY attention!’

While the film’s director Rian also made a playful comment as he tweeted: ‘I’m sure every mathematically possible pun is already in the mentions so I’ll just say LISTEN TO THIS MAN.

Their responses came after Chris used the moment to send a timely message about the upcoming US presidential election in November.

My boy! Proud of him. Got MY attention!

Chris also added a ‘facepalm’ emoji and another of a man shrugging in reference to the slip up.

And other celebrities praised his message as One Tree Hill star Hilarie Burton Morgan commented: ‘This is a power move.’

The Snowpiercer star went viral over the weekend after he posted a screen recording on Instagram of his family playing Heads Up.

But when the clip ended, a camera roll popped up which included a picture that appeared to be of a man’s genitals.

Shortly after the leak, Chris’ Avengers co-star Mark Ruffalo had an understanding response as he tweeted: ‘Bro, while Trump is in office there is NOTHING you could possibly do to embarrass yourself. See… silver lining.’