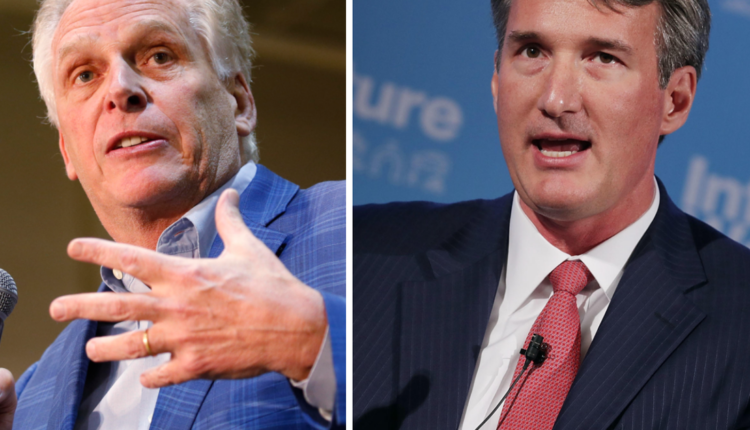 Republican Glenn Youngkin is betting his road to the governor’s mansion runs through Virginia’s schools, as he steers the race straight into the contentious relationship developing between some parents and their school boards.

He has made education his closing message and is going after Democratic opponent and former Virginia Governor Terry McAuliffe on several fronts: the state’s learning standards and a debate quote he’s fond of bringing up on the trail — McAuliffe’s comment that he doesn’t think “parents should be telling schools what they should teach.”

The former governor’s remark came as he defended his veto of a bill that would require that parents be informed about sexually explicit content in their children’s assigned readings.

A group backed by the right-wing Concord Fund, Free to Learn Action, that argues parents should have more of a role in developing school curriculum, is launching a $1 million dollar ad buy in Virginia that targets McAuliffe on education and two alleged sexual assault incidents in Loudoun County. The ads go up on TV Friday and run through Election Day.

Pay the Price by
Free to Learn Action on
YouTube

The ad, which will air in competitive counties in the exurbs of Washington, D.C., and Richmond, claims McAuliffe “spent years minimizing the role of parents.”

“Now our children are paying the price… Failing test scores… Sexual assaults…And a divisive, activist curriculum,” the ad says. A digital component will also run in Fairfax, Loudoun and Albermarle County, three counties Free to Learn says have “been the center of the state’s debate over K-12 education.”

In June, Free to Learn Action ran one ad in Fairfax County that criticized its school board over the removal of advanced math classes, an uptick in failing grades during the pandemic and reports that it hired consultants to help develop an “anti-racism, anti-bias” curriculum.

Free to Learn president Alleigh Marré said of the group’s campaign, “The fact that many parents no longer feel like their child is entrusted to a safe school environment erodes the most basic expectation between a parent and the education system.”

The ad’s line and Youngkin’s recent focus on sexual assaults is a reference to two sexual assault incidents allegedly committed by the same student in two different schools in Loudoun County, a wealthy exurb in northern Virginia.

At a rally in northern Virginia Tuesday night, Youngkin called on Democratic Attorney General Mark Herring to investigate the Loudoun County school board, accusing officials of trying to cover up the incidents.

“They shut parents out, and concealed the truth,” Youngkin said.

Herring, who is running for reelection this year, has not yet responded to a request for comment.

According to the Loudoun County Sheriff’s Office, the first sexual assault occurred in a girl’s bathroom in May. The alleged student and suspect was transferred to another school, and parents at the school were not notified. In October, the same student was accused of another similar assault in October. The student was arrested and sent to a juvenile detention center.

The Loudoun County Sheriff’s Office issued a release about the October incident, but did not immediately disclose the May investigation because “the investigation was complex.” The suspect and victim were “familiar with each other,” a statement by the sheriff’s office said.

In a press conference last week, Loudoun County Public Schools superintendent Scott Ziegler conceded that the district’s process of handling the sexual assault cases is “insufficient,” and it “revealed that we have shortcoming in alternative placement options for students involved in serious discipline infraction.”

One victim’s parents wrote in a statement that the suspect accused of the assault in the girls’ bathroom claimed to be gender fluid, and was permitted to use the girls’ bathroom. They criticized the school board’s gender-neutral bathroom policy policy, which was not in place during the first attack, and said it has “increased the likelihood of sexual assaults like these.”

The suspect’s gender identity has not yet been confirmed by the sheriff’s office.

On Tuesday, McAuliffe’s campaign aired an ad responding to Youngkin’s attacks on education, saying he and his allies have taken the former governor’s  words “out of context.” Youngkin’s campaign then responded with a video compilation of McAuliffe being asked about the debate quote, and his responses pointing to the state Board of Education and local school board’s role in developing the curriculum.

A Monmouth University poll released Wednesday found education is the second-most important issue for registered voters across Virginia, a 10% jump from its September poll. The survey also found Youngkin and McAuliffe essentially tied on the question of  who to trust to handle education, 39% to 38%.

The Monmouth poll had the two in a dead heat, 46% to 46%, with registered voters. A CBS News poll in mid-October with likely voters had McAuliffe up by three points.

Aaron Navarro is an associate producer for the political unit at CBS News, focusing on House and gubernatorial campaigns as well as the census and redistricting.