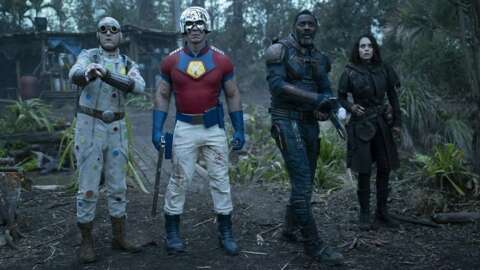 James Gunn may be done with The Suicide Squad, but DC isn’t done with Gunn yet. While he hasn’t announced a second DC Films project just yet, the studio already has plans to bring him back into the fold, according to The Hollywood Reporter.

“Gunn is always welcome back, whatever he wants to do. He really has a vision and he’s a great partner with us. Whenever he wants to come back, we’re ready for him,” said DC Films president Walter Hamada. “He’ll be back. We have more stuff planned.”

Now Playing: The Suicide Squad Stars Plays WOULD YOU RATHER

Gunn left a strong impression on those he worked with on the film, which hits HBO Max and theaters tomorrow.

“If I read the script and didn’t know James Gunn was going to direct it, it would have been a straight-up ‘no,'” said Margot Robbie, who stars in the film for her third turn as Harley Quinn. “I was like, no one could pull this off.”

“This is what happens when you leave a brilliant man alone with his thoughts,” said John Cena, who continues to wear his Peacemaker costume everywhere, apparently. “I didn’t even hear what it was [before saying yes].”

It wasn’t just the actors, though. Producer Charles Roven noted to THR that The Suicide Squad came in both under budget and with no reshoots.

“He storyboards every single shot in the movie,” Roven said. “Not just the action sequences.”

The Suicide Squad is nearly here. Before its release tomorrow, check out our review. Gunn has had plenty to say about the film in interviews, too. He’s talked about how he decided who to kill, spoke about the review bombing the film is currently receiving, and told GameSpot about how the movie will surprise us.

OnlyOffice Desktop Editors review: All your Microsoft Office editing needs in one app