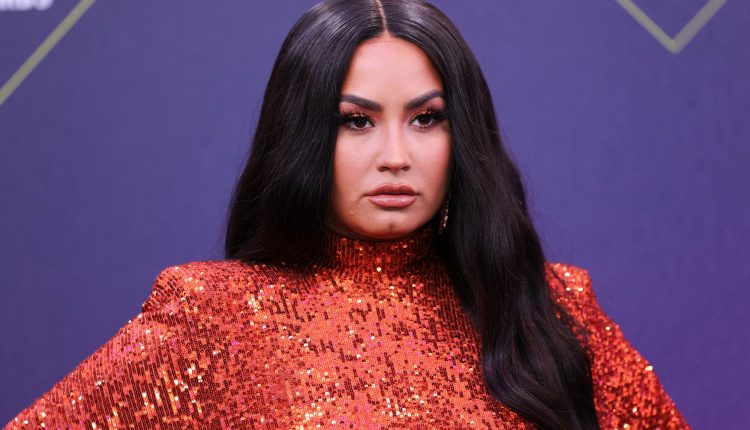 Demi Lovato has called out gender reveal parties for being ‘transphobic’.

The singer, 28, shared an extract from Alok Vaid-Menon’s book Beyond The Gender Binary that argues throwing gender reveal parties can be seen as a form of transphobia because they reinforce limiting ideas of gender.

Vaid-Menon writes: ‘It’s both insincere and incorrect to pretend that gender parties are not transphobic.

‘These ideas like the gender binary, fuel mistreatment of all people, but especially trans and gender non-conforming people.’

The book argues that gender reveal parties only identify a person’s gender by their genitals and by doing so it ignores other gender types.

Another argued that only individuals can ‘determine their own gender, stating: ‘Even though we might have grown accustomed to other people gendering us, that doesn’t make it right.’

Supporting Vaid-Menon’s ideas, Demi encouraged her 99.8million followers to read the author’s book and share the information in her post.

She captioned it: ‘@alokvmenon with the real 🙏🏼💕 Thank you for sharing your knowledge and educating us always.

‘Repost: “This is not about being politically correct, it’s about being correct. The refusal to acknowledge this stems from a misunderstanding of what transphobia is.”‘

Outlining what ‘transphobia’ is, Demi continued: ‘Transphobia is not just prejudice or violence against an individual trans person, it is a belief system that presumes non-trans people to be more “natural” than trans people. Only individual people can self determine their gender.’

Demi’s fans seemed divided by the post, with some praising the Heart Attack hit-maker and others disagreeing with the ideas shared.

‘I love this!! 👏🏼,’ commented one fan, while another told Demi they ‘totally agree’ with her post.

One more fan commented: ‘As a mom of transgender son, I celebrated his gender before and I celebrate it now. I think celebrating is good. [Gender] reveal is good positive.’

Another follower wrote in response: ‘As a trans person, I don’t find gender reveal parties offensive as long as IF the child turns out to be trans, their idenitity is respected as soon as they come out. Are you telling me that at this point every child should have gender neutral names and pronouns on they legal documents until they grow up JUST IN CASE they might be trans? I’m all for a gender spectrum, but it doesn’t mean cisgender people won’t exist anymore…’ Demi’s post comes as she is set to open up about her overdose in 2018 in a tell-all documentary titled Dancing With The Devil, that will premiere on YouTube next month.

Giving a no-holds barred account of the darkest time in her life, Demi reveals that the near-fatal incident caused her to have multiple strokes and a heart attack.

In a trailer for the documentary, she says: ‘I’ve had a lot of lives, like my cat, you know? I’m on my ninth life. I’m ready to get back to doing what I love, which is making music.

‘I’m not living my life for other people or their headlines or their Twitter comments.’

The documentary will also featured interviews from Demi’s close friends and family.

The former Disney star was sober for six years, before relapsing three months before her overdose. She was hospitalised for two weeks before entering an inpatient rehab facility.

Demi Lovato: Dancing With The Devil premieres on YouTube on March 23.