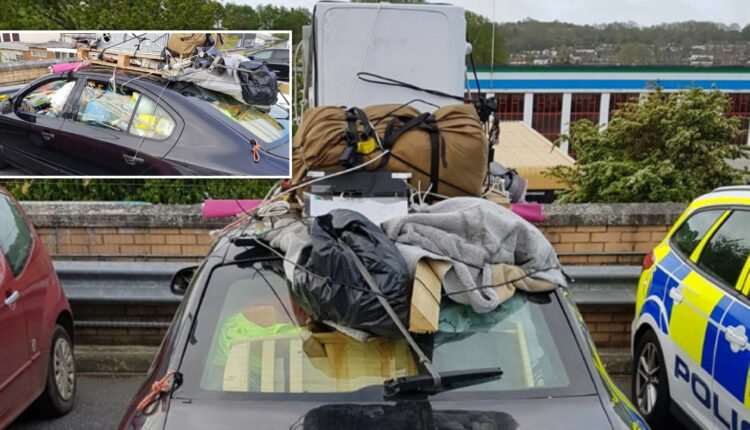 Driver arrested for car filled and stacked with household items

You’ve heard of ‘everything but the kitchen sink’.

But what about everything AND the kitchen sink… on a car roof?

That was the bizarre situation faced by Sussex Police on Friday, who arrested a man for driving a vehicle in a dangerous condition.

The suspect’s black car was spotted by officers in Brighton filled to the brim with household items and furniture.

The contents filled almost the entire interior of the vehicle, from top to bottom, featuring everything from fold-away wooden chairs to Nesquik milkshake mix and metal poles.

On the roof a wooden pallet was mounted by a huge appliance while blankets and bin bags hung off the back of the car.

The owner is alleged to have assaulted a police officer when approached about his vehicle.

Sussex Roads Police tweeted images of the car in question, saying: ‘Colleague stopped the driver of this vehicle earlier in Brighton.

‘Transpired the driver thought travelling around with all this on his roof was okay.

‘He’s been arrested for driving a vehicle in a dangerous condition and assaulting a police officer…. no excuse.’

Twitter users branded the driver a ‘moron’ and an ‘imbecile’.

‘I can’t actually believe the driver though that was okay,’ wrote one, ‘What an absolute b*** end’.

Others defended the man, suggesting he might have been in a vulnerable situation.

One wrote: ‘Before you charge around being negative maybe you should ask yourself why he is driving around like that… Was he made homeless? Was he moving and could not afford a van…maybe there was nobody to help him.’

UK law stipulates that a vehicle can be classed as dangerous if its load or the way it is secured ‘is such that the use of the motor vehicle or trailer involves a danger of injury to any person.’

Do You Really Need All that Office Space?