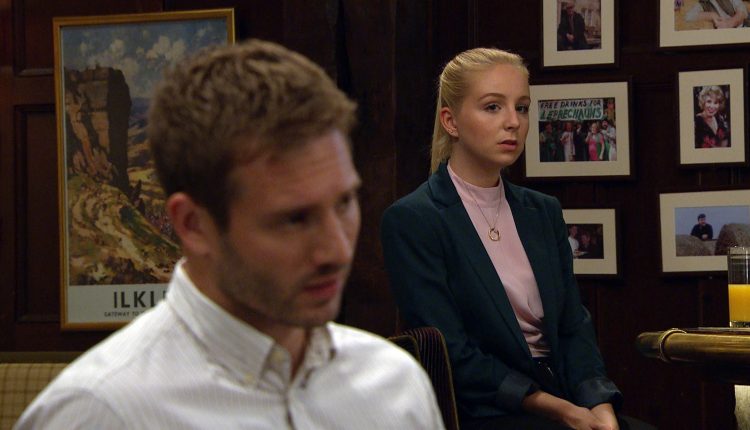 With Belle having revealed to Nate that Jamie knocked Moira (Natalie J Robb) down in the hit and run, there has been animosity aplenty between the two.

Nate wants her to reveal such information, but Belle refused to do so, as it would mean Jamie could go to prison — something which she naturally doesn’t want.

In Friday’s episode (August 21), Jamie attempted to bribe Nate into keeping quiet — using the fact that the young man is in need of money now that he’s got a baby on the way.

in tonight’s edition (August 24), Belle rings Zak (Steve Halliwell), and — as she does so — Jamie approaches to reassure her that, although Nate hasn’t yet agreed to keep shtum, he’ll do whatever it takes to keep him on side.

Belle’s joy soon fades, however, as Nate later comes face-to-face with her and proceeds to reveal that Jamie attempted to bribe him into keeping quiet.

Belle is horrified, and she later has it out with her beau, but he explains that it’s now up to her to her to talk Nate round, as he appears to have exhausted all of his options.

The question is: will Belle be able to convince Nate to keep queit?


MORE : Why Emmerdale’s Mandy and Vinny lockdown episode is a two-hander triumph