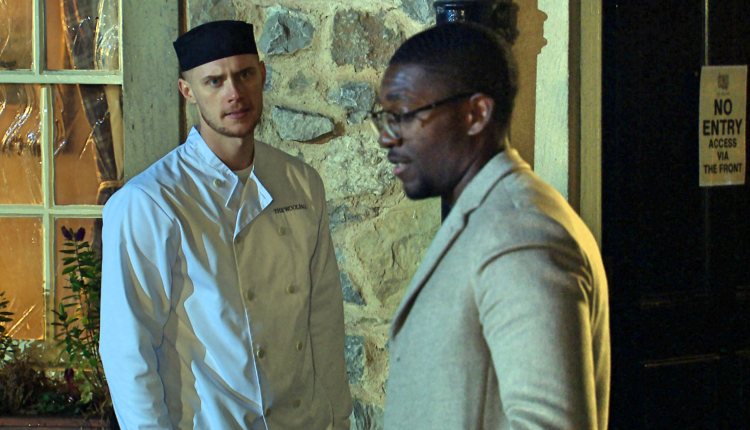 Emmerdale spoilers: Luke Posner denies that he is gay as Ethan Anderson puts pressure on

It’s safe to say viewers have been somewhat suspicious of Luke Posner (Max Parker) in Emmerdale ever since he arrived. His relationship with Victoria (Isabel Hodgins) has been built on kindness and trust, which could all be about to change.

With secrets to be revealed that will impact Luke and Victoria’s relationship, it would appear new character Ethan Anderson (Emile John) is the one to create friction among this couple, when Luke denies he is gay as Ethan continues to put pressure on him.

New arrival Emile recently revealed more on his character Ethan, and how his personality will impact things hugely when it comes to Luke’s situation:

‘Ethan is a young professional – he has a strong sense of justice that he has inherited from his dad. He has confidence, brash and honesty. He has a pessimistic view to people and actions – this is due to several betrayals from his past. He always wants to seek out the truth – he has trust issues, he will wrestle with that.’

Coming up, troubled Luke once again tells Ethan he isn’t gay and overcompensates with his affections for Victoria for his benefit.

Giving his own thoughts on Ethan, Max added how: ‘Ethan is a righteous man. If he senses someone is being lied to, he will confront who he needs to to put it right. Luke is not an exception to that rule.’

Luke has been with Victoria for a while, and will continue to deny the fact that he is gay. Max explained Luke’s history, adding how much Ethan is set to change things dramatically between Luke and Victoria:

‘There’s definitely a familiarity between them and the way it unravels and evolves is sure to shock the viewers. It’s not how you’d expect the relationship to start. I think Ethan thrives in exposing the truth and revealing people’s shortcomings so they can learn and grow.

It’s a harsh method and there are sure to be consequences in the case of Luke and Victoria – it could shatter the trust between them.’