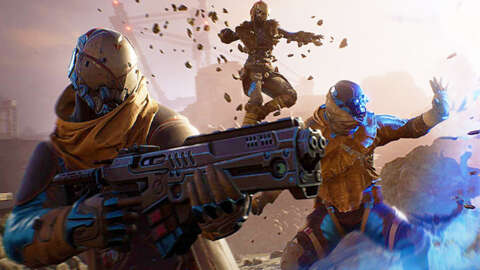 A number of ex-developers from People Can Fly, the developer behind Outriders, have formed a new studio focused on a first-person shooter in 2021. As reported by Gamesindustry.biz, Gruby Entertainment was founded as an independent studio in 2020 by ex-People Can Fly developers Grzegorz Michalak, Karol Szyszka, Paweł Siech, and Kamil Misiowiec.

The new Poland-based, fully remote studio was revealed by Super.com, the team’s first publishing partner. Super.com, which published Raji: An Ancient Epic last year, will provide consultation and guidance as part of the partnership. Gruby Entertainment’s goal is to create “high-calorie” gameplay for hardcore gamers in its games.

“We are thrilled to expand our team and knowledge base, and show the world a fresh approach to action games,” Misiowiec told Gamesindustry.biz.

The team consists of veteran talent that has worked on both independent titles and massive blockbusters like Outriders.

Outriders was a success for People Can Fly and Square Enix, both critically and commercially. In GameSpot’s Outriders review, critic Phil Hornshaw awarded the game an 8/10 and wrote: “[Outriders] is surprisingly deft at combining things that shouldn’t work together: Its story is often funny but similarly severe; its combat requires you to take cover and to charge; its abilities make you phenomenally powerful but prone to overestimating yourself.”

Square Enix announced that Outriders hit 3.5 million players in the first month and the publisher expects it to become the “next major franchise” for the company.