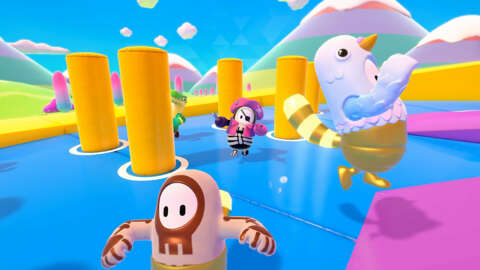 Fall Guys isn’t just adding a few new games and costumes for Season 4; it’s also introducing Squads mode, and the new team-based option will let even the clumsiest players stay in the game if their teammates are able to keep it together.

Speaking to IGN, lead game designer Joe Walsh (far cooler than the Eagles lead guitarist), said that if one player is eliminated during a round, they’ll still be able to come back if their teammates perform well enough. It isn’t necessarily about just dying first, but scoring the lowest as a team. A points system will determine who did the worst, which should also make it so being simply the best player doesn’t necessarily mean your team will be the best.

You’ll also be more encouraged to sabotage other players, especially if you have more people left as you’re approaching the finish in a Final Round. Two players can sacrifice themselves to knock out the other team while the remaining player cruises to victory, for instance. Just hope you don’t have to play another game against those players, as they will likely be pretty mad.

Of course, there are still zany new costumes that let you customize your little bean-shaped contestant, too. Fall Guys is paying tribute to another surprise hit, Among Us, with its own themed costumes in Season 4. The game should continue getting extensive support, as well, as Mediatonic was purchased by Epic Games. Currently available on PS4 and PC, Fall Guys will also be coming to Xbox and Nintendo Switch this summer. Given Epic Games’ commitment to cross-play, we wouldn’t be surprised to see Fall Guys support play between the systems sooner rather than later.