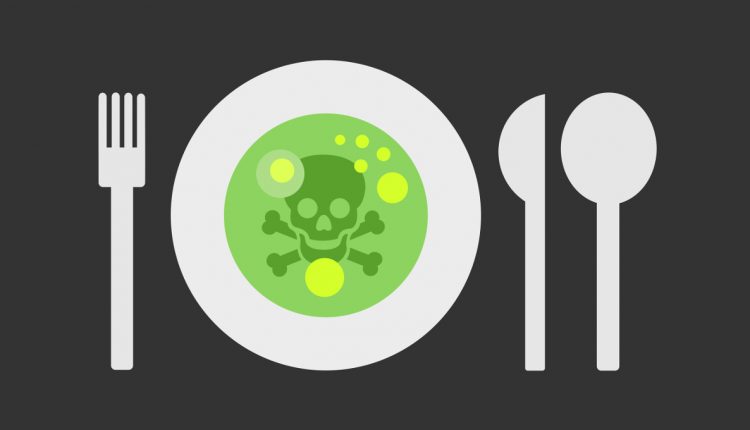 Editor’s note: Each Spring, attorneys Bill Marler and Denis Stearns teach a Food Safety Litigation course in the LL.M. Program in Agricultural and Food Law at the University of Arkansas School of Law. This specialized program for attorneys brings together those who are interested in our food system, from farm to table. As a final assignment, students are asked to write an op-ed or essay on food safety, with the best to be selected for publication in Food Safety News. The following is one of the essays for 2020.

Covid-19 is bringing out the hoarder in all of us. Canned goods, packaged foods, and bottled water are flying off shelves almost as soon as they are stocked. The Food and Drug Administration (FDA) waylays concerns that fresh produce may carry the virus. It’s easier for us to consider food safety in terms of pathogen contamination such as Salmonella and E-coli, or in the present case, Covid-19. What often remains unaddressed are the food safety issues presented by toxic chemicals within the very thing we hope is keeping our food safe in the first place: food packaging.

However, chemicals that make up these plastics can migrate into food with which it comes into contact. And these chemicals are cause for concern having been linked to major health issues such as cancer, birth defects, and autism.

While these chemicals are regulated in our water by the Environmental Protection Agency (EPA), the FDA regulates chemicals used in packaging that come into contact with food as indirect food additives.

This migration standard doesn’t account for bioaccumulation of chemicals found in multiple products within a person’s diet. And many of the health issues associated with food additives typically happen when people are continuously exposed to small amounts over long periods of time.

Regulations governing the safe use of plastic chemicals used as food contact substances focus on what might migrate from the polymer into the food, an not the complex variations in the polymerization process. Thus substances used in accordance with good manufacturing practices are considered part of the basic polymer and are implicitly cleared along with the polymer, requiring no additional testing for its safety.

Rather than a packaging company needing to prove the safety of its product, the burden is placed on the FDA to prove it is unsafe.

There are currently three classification of chemicals found in food packaging that have gained widespread attention: phthalates, bisphenol A (BPA), and per- and polyfluoroalkyl substances (PFAS).

Phthalates
Phthalates can disrupt hormones and have been linked to genital birth defects in infant boys and learning and behavior problems in older children. And yet these phthalates have been found in cheeseburgers, sandwiches, and Kraft’s macaroni and cheese.

Within our food system, phthalates are used to increase flexibility of plastics. While research shows that they migrate into foods from every point along the supply chain, a study found that dining out was associated with the highest phthalate exposure among Americans, with levels nearly 35 percent higher than people who reported eating food mostly purchased at the grocery store.

Having already found that levels presented are safe, the FDA hasn’t addressed multiple petitions requesting the FDA deem the use of phthalates in food packaging unsafe. This despite the FDA’s prohibition on carcinogenic food contact materials. And yet phthalates, which have found to be linked to cancer, remain in food packaging.

BPA
Considered a safe indirect food additive by the FDA, BPA is found in soda and food cans.

BPA is also a known endocrine disruptor. It can act like estrogen in the body and potentially change the timing of puberty, decrease fertility, increase body fat, and affect the nervous and immune systems. It’s also connected with childhood obesity, and heart disease.

Dr. David Feldman, a professor at Stanford University who almost 30 years ago discovered the link between polycarbonate containers and BPA migration, said of today’s state of BPA use: “We are still exposed to this molecule in our food supply, it’s in our urine. The question of how bad it is, well, it’s still debated.”

When petitions called for the FDA to amend its food additive regulations to ban BPA, the FDA would not address them. But as a response to consumer pressure, retailers chose not to wait for a regulatory decision and stopped selling reusable plastic water and baby bottles made with BPA in 2008.

The FDA finally banned BPA in baby bottles, sippy cups, and infant formula packaging. But it was only at the request of the plastics industry after its abandonment of said uses; it had nothing to do with the safety issues they pose.

PFAS
Known as “forever chemicals,” some PFAS persist in the environment and in our bodies. While people are mostly likely exposed by consuming PFAS-contaminated water or food, exposure also occurs from products that contain PFAS.

Wonder what kind of products contain PFAS? There are PFAS approved for use on paper or cardboard to prevent grease from going through them. These include microwave popcorn bags, pizza boxes, fast food wrappers, and even compostable food containers.

PFAS have been linked to a variety of health issues, including cancers, reproductive problems, lower immunity after tetanus and diptheria vaccination, high cholesterol, thyroid function, and liver injury.

In the Fourth National Report on Human Exposure to Environmental Chemicals, CDC scientists measured at least 12 PFAS in the blood serum (the clear portion of blood) of participants aged 12 years and older who have taken part in the National Health and Nutrition Examination Survey (NHANES) since 1999. The scientists found four PFAS in the serum of nearly all of the people tested, indicating widespread exposure to these PFAS in the U.S. population.

Last year, the FDA released a report analyzing 91 samples of food products for PFAS and found 14 with detectable levels. Among them were ground turkey, tilapia, and chocolate cake. The cake contained 17,640 parts per trillion of PFPeA, one of the many PFAS chemicals. By way of comparison, the EPA set a health advisory level in drinking water of 70 parts per trillion for PFOA and PFOS.

PFOA and PFOS are first-generation PFAS that are so toxic that U.S. manufacturers largely phased them out by 2015, though U.S. law doesn’t prohibit companies from importing them. These types of PFAS, the FDA uses the EPA’s toxicity reference value when conducting a safety assessment. The FDA does not currently have toxicity reference values for dietary exposure for PFAS other than PFOA and PFOS.

Chemical companies have replaced first-generation PFAS with other chemicals in the PFAS family. Next generation PFAS act a lot like their predecessors, with early studies demonstrating that they are similarly dangerous.

Current regulations aimed at addressing toxic substances
California’s Proposition 65, officially known as the Safe Drinking Water and Toxic Enforcement Act of 1986, requires businesses to provide warnings to Californians about significant exposures to chemicals that cause cancer, birth defects or other reproductive harm. BPA, phthalates, and PFOA and PFOS are on this list of chemicals managed by the Office of Environmental Health Hazard Assessment (OEHHA). However, OEHHA has not set maximum allowable dose levels for PFOA or PFOS.

And now California’s Department of Toxic Substances (DTSC) has identified PFAS, BPA and phthalates in food packaging for potential candidates as priority products under its Safer Consumer Products program. If finalized, this would require manufacturers of these chemical-product pairs to conduct an analysis to determine if safer alternatives exist.

Similarly, Washington state enacted a law prohibiting PFAS use in food packaging, providing there is a safer option.

And Maine passed a law banning the intentional use of phthalates and PFAS in food and beverage packaging upon identification of a viable replacement.

Bucking the trend of needing a viable alternative, the city of San Francisco has banned the use of single-use food service ware containing PFAS.

And while local and state governments are taking the lead to address PFAS in the food system, Congress’s recently approved annual defense spending bill includes several provisions aimed at PFAS. The National Defense Authorization Act (NDAA) prohibits the use of PFAS in the assembly and packaging of military ready-to-eat meals starting October 1, 2021.

How businesses are tackling toxic chemicals in food packaging
The plastic packaging market is a multi-billion dollar industry expected to reach $320 billion by 2027. You can imagine that with this much money involved, disruptive changes aren’t exactly welcomed. And without regulators, it’s up to consumers to force retailers to demand alternative packaging from suppliers.

It would be almost impossible to successfully litigate a personal injury claim based on exposure to BPA, phthalates and PFAS  in food packaging. With their prevalent use, a claimant wouldn’t be able to prove their injuries was caused by a single product or line of products, or even know which manufacturer to implicate.

Whether because it lacks the mandate, budget and political will to modernize our broken chemical safety system, the FDA usually take no action or simply follows industry’s suit.

So while our regulators and courts fail to provide the arenas in which to address food safety and chemical usage, the court of “public opinion” still provides the best recourse. In response to consumer concerns, businesses take the lead in making necessary changes.

Earlier this year, Taco Bell announced its plan to phase out phthalates, BPA, and PFAS from its food packaging by 2025. The fourth largest food-outlet in the United States, the company stated that it had decided to remove the chemicals from its packaging based on its responsibility to “improve public health” for the 40 million customers served per week, most of whom “care about sustainability.” The company did not give details on how it would implement the plan or say what alternatives would be used.

Now with Covid-19 changing how people eat, it may be possible that a shift away from eating out and towards cooking at home may decrease our exposure to toxic chemicals. However, an increase in the consumption of packaged, bottled, and canned food and beverages may offset any benefits from limiting take-out.

And with consumers less concerned with chemicals leaching into their food than they are with the potential for a virus to get into their food, hopefully businesses like Taco Bell will continue to change practices and eliminate toxic chemicals from food packaging.

‘Big Six’ banned 9 years ago are getting their due with E. coli testing