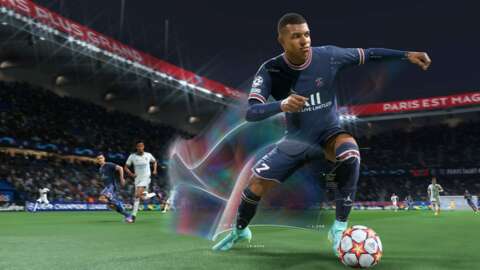 EA Sports has formally announced FIFA 22, detailing what’s new in this year’s game, who is on the cover, what features are exclusive to next-gen, details on how to upgrade, and more. In particular, the only way to get the “Dual Entitlement” option that gets you the game on both PS4/Xbox One and PS5/Xbox Series X|S, is to purchase the $100 Ultimate Edition, if that matters to you. Read on to learn everything we know so far about FIFA 22.

FIFA 22 will launch on October 1 for PS5, Xbox Series X|S, and PC, as well as Xbox One, PlayStation 4, and Stadia. You can also get the game on PC through Origin and Steam. A “Legacy Edition” of the game will be available for Nintendo Switch.

Paris Saint-Germain’s Kylian Mbappé is on the cover of FIFA 22, marking his second straight year in that role. He joins esteemed company in gracing the cover in back-to-back years; Lionel Messi and Cristiano Ronaldo did it before him.

“Being on back-to-back FIFA covers is amazing,” Mbappé said. “I have a very special relationship with the game and look forward to enjoying FIFA 22 alongside all of you.”

The FIFA 22 announcement trailer focuses on the new HyperMotion technology that the game uses to better capture the sport more authentically through machine learning and other technology magic. Check out the trailer below and read on to learn more about HyperMotion.

This is a new piece of technology that EA Sports developed to help bring the “most realistic and immersive gameplay experience to life, in every match and across every mode.”

As mentioned here, HyperMotion is only available on PS5, Xbox Series X|S, and Stadia.

EA performed motion capture on 22 professional footballers “playing at high intensity.” On top of this, EA’s own machine learning tools are capable of “learning” from in excess of 8.7 million frames of “advanced match capture” to create new animations in real time. This will apply to shots, passes, and crosses. Overall, EA says HyperMotion “transforms how players move on and off the ball.”

“FIFA 22 offers millions of fans around the world a chance to engage with the sport they love in an unprecedented way,” EA Sports FIFA GM Nick Wlodyka said. “Each player experiences FIFA in their own way but on-pitch gameplay is the unifying constant, so we’re excited to offer deep innovation there. HyperMotion elevates that even further on next-gen consoles and Stadia and completely changes the feel of the game.”

FIFA 22 will have multiple modes, including Career, Volta, Pro Clubs, and FIFA Ultimate Team. In this year’s game, EA said players can look forward to “more consistency and distinct personalities” for goalies, specifically, with the goalkeeper system seeing a “complete rebuild.”

Career mode, meanwhile, has a new Create a Club feature, while the Volta mode has “reimagined gameplay” this year. For FIFA Ultimate Team, FIFA 22 has Ultimate Team Heroes this year, which EA says are “completely new items that represent the stories and glory of cult player and fan favorites.” EA will release more details on FIFA 22 overall this summer.

Everyone who pre-orders FIFA 22’s $100 Ultimate Edition by August 11 will get an untradeable FIFA Ultimate Team Heroes player item starting December 1, along with all these benefits:

The $100 Ultimate Edition of FIFA 22 unlocks four days early, beginning September 27, and it is seemingly the only way to get Dual Entitlement. This grants you access to the game across PS4/Xbox One and PS5/Xbox Series X. The game’s standard edition costs $60 for PS4/Xbox One and $70 for PS5/Xbox Series X|S. Here is a breakdown of the differences between the Ultimate and Standard editions.

EA Play subscribers can get an early access trial to FIFA 22 and they will receive in-game rewards each month, though these were not announced.

FIFA 22 is developed by EA Vancouver and EA Romania.