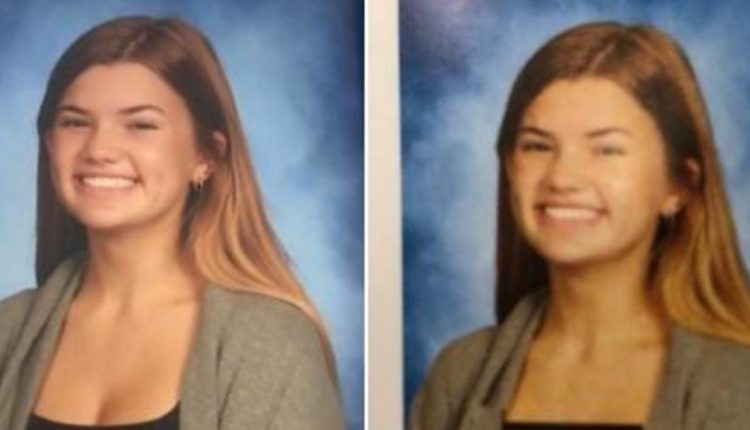 Controversy surrounds the digital alteration of photos in a northeast Florida high school’s yearbook to cover up some skin exposed in the original photos, which school officials deemed inappropriate.

CBS Jacksonville affiliate WJAX reports 80 students — all female — at Bartram Trail High School in St. Johns had their yearbook photos altered without their permission. Exposed shoulders and low necklines were covered up.

Officials of the St. Johns County School District told the station yearbook photos must follow dress code guidelines and they deemed the 80 pictures inappropriate. The officials said the school’s yearbook coordinator, a female teacher, made the decision.

Officials of the school weren’t made available for comment to WJAX.

Before-and-after photos of several of the girls showed the clear edits, WJAX said.

This is a before and after yearbook photo taken of Bartram Trail 9th grade high school student, Riley O’Keefe.

She says it was deemed inappropriate by the school and photoshopped in the printed edition.

Parents and students are now asking for a major [email protected] pic.twitter.com/f8MjkZMDOw

Embarrassed, ashamed and sexualized were the most common terms students used when describing how they felt.

Ninth-grader Riley O’Keefe said the situation has grown much bigger than yearbook photos.

“The double standard in the yearbook is more so that they looked at our body and thought just a little bit of skin showing was sexual,” O’Keefe said. “But then they looked at the boys, for the swim team photos and other sports photos and thought that was fine, and that’s really upsetting and uncomfortable.”

“You’re not only affecting their photo — it’s not just for protecting them — you’re making them uncomfortable and feel like their bodies aren’t acceptable in a yearbook,” O’Keefe added.

Fellow ninth-grader Zoe Iannone remarked to WJAX that, “They opened up the yearbook, saw pictures and that was the first thing they worried about. It was unfair and I was horrified. I was disgusted.”

But one mother of a tenth-grade daughter at the school said she’s in favor of the dress code and the edits.

“If parents aren’t teaching at home how daughters should dress and dress decently, then the school has to parent,” said Rachel D’aquin.

O’Keefe said no matter people say, she’ll continue to advocate for herself and others.

“The dress code and sexualization of young girls’ bodies has been happening for a long time,” she said. “All the messages I get about people being thankful for me speaking out are worth it, and I’d do it a million times.”

The school said they will refund the cost of the yearbook to parents who complain about the issue.