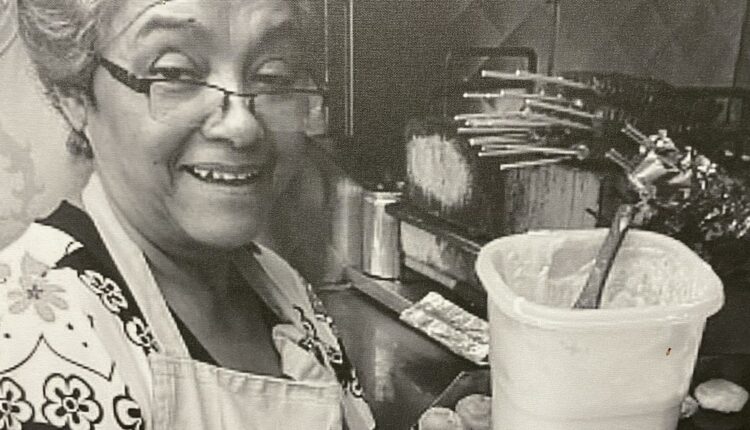 From food cart to thriving business, NYC’s “Arepa Lady” reflects on her “triumph”

Maria Cano – better known as the “Arepa Lady” – has been a staple in Jackson Heights, Queens for decades. After fleeing violence in Colombia, she started selling arepas (corn cakes) from a street food cart since the late 1980s, becoming so popular she and her family were eventually able to open up two storefronts in New York City and potentially a third on the way.

However, the origins of her venture were not easy.

“When you arrive as an immigrant in the United States, life is very difficult because you don’t know anyone, you don’t know the language,” she told CBS News in Spanish. “Having young sons that were in school was tough.”

Cano, now 77, was a former lawyer and judge in Medellin, but as drug lord Pablo Escobar’s terror grip continued to widen and government employees became targets of assassinations, she knew it was time to go. Cano left with three of her four sons – all under the age of 18 at the time – and settled into New York City so they could have “better opportunities” in life. The fourth son, who was in college at the time, eventually joined them.

But it was difficult to make ends meet to start, she said. With the help of a friend, Cano was introduced to the street vendor world, where she learned how to make her signature arepas with cheese.

“I had never made arepas before,” she said, with a laugh. “But necessity creates solutions. It was something I needed to do. In a desperation to pay rent, feed my kids and satisfy the needs of an entire family, I saw an opportunity.”

Maria Cano has been a staple in Jackson Heights, Queens for decades.

To make matters even more stressful, Cano and her sons were undocumented and the risk of being deported was another reality they had to experience. Her youngest son, Alejandro Osorio, was about four years old when he came to the U.S. with his mother. Osorio, who now runs the successful family business, told CBS News that the beginnings were a “real struggle.”

“She used to work from 9 p.m. or 10 p.m. to 5 a.m. because that’s the only time cops wouldn’t really harass you,” he said, adding that she didn’t have a street vendor license.

“So, she would work those hours to be able to work and even then, like sometimes they will come in and confiscate those products, give you crazy tickets and that’s because she got lucky, she never got arrested,” he said.

Cano finally got a vendor  permit around 10 years ago, Osorio said, but it was a seasonal one. According to New York City’s mobile food vending license page, those only last from April through October. The city put a cap on the number of permits for selling food on streets to 3,000 in 1983.

Last month, a viral video showing sanitation workers throwing out a street vendor’s fresh produce in the Bronx sparked outrage, and for Osorio, it brought “flashbacks” to one winter when he was teenager.

“My mom got three carts confiscated [by the NYPD] that winter,” he said. “And we were like super dead broke, and we had to go to a church for food.”

Maria Cano, a former judge, was known as the “Arepa Lady” in Jackson Heights, Queens because of her signature arepas with cheese – or corn cakes.

Despite the adversity, Cano and her sons finally opened their first storefront location in 2014 after saving up $70,000 for six years. (They later relocated). She now has two brick-and-mortar restaurants with her nickname and face — one a few blocks from where she sold arepas on Roosevelt Avenue and another in Brooklyn. A third location is in the works, according to Osorio.

The flagship Jackson Heights venue has welcomed the likes of Mayor Bill de Blasio, Congresswoman Alexandria Ocasio-Cortez and other public figures who have enjoyed munching on the famous arepas. Most patrons who generally frequent the store today are immigrants or children of immigrants, Osorio said. He thinks in part, that helped quell that impact of the coronavirus pandemic on the business because the neighborhood is filled with immigrants.

Osorio believes that customers gravitated toward his mother when she worked at the cart because she was a “maternal figure” for others.

“People really liked to sit there and feel like they’re back at home eating an arepa or a meal from their parents, and you get that love, that warmth from being back home,” he said.

Cano retired in 2017 and returned to Medellin prior to the pandemic. She told CBS News that she’s “very proud” of what she helped build.

“It was a triumph because of all the effort we did,” she said.

Christopher Brito is a social media producer and trending writer for CBS News, focusing on sports and stories that involve issues of race and culture.