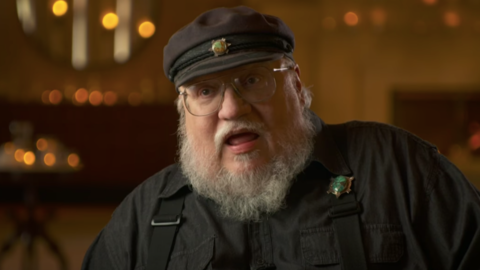 George R.R. Martin is staying in business with HBO, recently reportedly signing a “massive overall deal” with the network to development more content for HBO and HBO Max.

According to The Hollywood Reporter, Martin’s deal covers five years and is said to be in the “mid-eight figure” range. That means the deal is worth at least $10 million.

Martin signed the deal, according to the report, amid the Game of Thrones resurgence at HBO. The company is said to have a total of five projects based on A Song of Ice and Fire in some stage of development right now. One of these, House of Dragon, is getting a series, while the others haven’t been greenlit yet.

Martin is also working with HBO on a new series based on his friend Roger Zelazny’s fantasy novel, Roadmarks, and another show called Who Fears Death.

Outside of HBO, Martin is working on a series called Wild Cards for Peacock and In the Lost Lands, a movie based on his own short stories with Dave Bautista signed on to star.

What’s more, Martin consulted with From Software on the studio’s highly anticipated RPG, Elden Ring, while he is of course also continuing to write the next A Song of Ice and Fire book, The Winds of Winter.