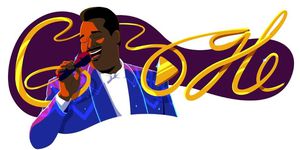 Luther Vandross was a singer, songwriter and producer whose wide tenor vocal range earned him eight Grammy Awards and the nickname “the velvet voice.” Considered one of the leading romantic balladeers of his generation, his collection of hits include Never Too Much, Here and Now, Power of Love/Love Power and Don’t Want to Be a Fool.

To honor the talented R&B singer, Google dedicated an animated musical doodle on Tuesday to Vandross on what would have been his 70th birthday.

Born April 20, 1951, Luther Ronzoni Vandross Jr. showed a keen interest in music while growing up in New York’s Lower Eastside and the Bronx. He taught himself to play the piano at the age of 3 and founded a Patti LaBelle fan club while in high school.

His mother encouraged Vandross’ musical interest and education, and he frequently accompanied his sister Patricia to see Dionne Warwick and Aretha Franklin perform. (Patricia was a member of the Crests, a doo-wop group known for the 1958 hit 16 Candles.)

After graduation, Vandross began performing his own songs at Amateur Night at Harlem’s Apollo Theater and joined a theater workshop, Listen My Brother, which appeared in several episodes of Sesame Street’s first season. His career picked up in 1975,  when he co-wrote David Bowie’s Fascination and Everybody Rejoice for the 1975 Broadway musical The Wiz.

As an in-demand backup singer, he performed with a wide range of artists, including Bowie, Diana Ross, Cat Stevens and Roberta Flack, before launching a solo career in 1981. His debut studio album Never Too Much, which provides the soundtrack for Tuesday’s doodle, reached No. 1 on the R&B charts and was the first of 14 studio albums that went either platinum or multiplatinum.

Vandross stopped making public appearances after suffering a stroke in 2003 but made a dramatic return to the charts that year with the album Dance with My Father. The album captured four Grammys, including best song for the bittersweet title track that recalls childhood memories of his father, who died when Vandross was 8.

Vandross’ family praised Google’s tribute for capturing the essence of his songs.

“It is a true reflection of Luther Vandross’ musical legacy around the world to be honored by Google with an animated video Doodle that fittingly captures the joy Luther has brought the world,” the family said in a statement provided by Google. “Luther made each of his songs about one simple, universal subject — love; an emotion and feeling common to the human experience no matter who you are, where you’re from or what you look like.”

Best wireless charger: Ditch the headache of cables with our top pick

Kristin Cavallari Reminds Us Why We Need a Bodysuit This Summer