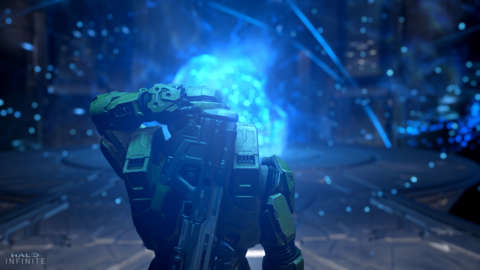 Halo Infinite Battle Royale: Breaking Down The Rumors And Possibilities

Will Halo Infinite get a battle royale mode, and does it even need one?

How We Got Here

With games like Fortnite, Apex Legends, PUBG, Call of Duty: Warzone, and others dominating the headlines and sparking conversations about battle royale, it was only logical that attention would eventually turn to Halo. In July 2018, Halo franchise writer Jeff Easterling poured cold water on the idea of Halo Infinite featuring a battle royale mode by saying, “I’ll tell you right now, the only BR we’re interested in is Battle Rifle.”

In April 2019, noted Microsoft insider Brad Sams that 343 was considering the possibility of adding a battle royale mode to Halo Infinite in some form. Sams reported that Halo Infinite’s take on battle royale would offer something different compared to Fortnite and Apex, but we never learned any specifics.

Responding to this, Halo franchise manager Frank O’Connor said 343 will not discuss the launch content for Halo Infinite “until we’re ready.” That being said, O’Connor confirmed that Halo Infinite will not release with a battle royale mode. O’Connor reminded players that they can basically create their own version of battle royale using the Forge tools. A quick search inside Halo 5 yields a number of results, but these fan-made modes are a far cry from something more substantial for Halo.

O’Connor did say that 343 wants to develop “big social modes with lots of organic shenanigans” for the next Halo game. However, again, O’Connor said there were no plans to bring battle royale to Halo. Though these comments were made in April 2019–so 343’s plans for Halo Infinite could have changed since then.

So there you have it. The official word is that Halo Infinite may not have a battle royale mode, at least not at launch, or potentially ever. But Halo Infinite is a live service game with plans to exist and live on for 10 years into the future as a platform that grows and evolves.

Could a battle royale experience ever be a part of that?

Famous streamer and content creator Jack “CouRage” Dunlop tweeted recently that Halo Infinite ought to include a battle royale mode to keep up with the times.

He said, “I’ve played Halo since 2005. It’s my favorite game series of all time. If Halo Infinite doesn’t release with a robust and well-made battle royale game mode, then it will be one of the greatest gaming failures in history.”

If Halo Infinite doesn’t release with a robust and well made Battle Royale game mode, then it will be one of the greatest gaming failures in history.

Have a good day.

Dunlop is intentionally being hyperbolic. His tweet went viral, with responses pouring in, both positive and negative. The tweet getting a reaction like that is evidence that people care a lot about whether or not Halo Infinite has a battle royale mode.

Microsoft is no doubt aware of this ongoing conversation. It’s likely that many developers making a shooter game in the years since PUBG’s rise to popularity in 2017 have probably given some thought to the idea of making a battle royale. For example, Respawn cited PUBG as the reason for making Apex Legends instead of Titanfall 3. It’s presumed that other developers have at least considered the possibility of adding a battle royale mode to their games, as was the case with Battlefield V’s Firestorm mode, or creating a brand-new game, like Ubisoft did with Hyper Scape.

An issue people bring up is that 343 as a studio of developers is only so big, and directing efforts to a battle royale experience could come at the expense of the traditional multiplayer experience. Fans have pointed to the example of Call of Duty: Black Ops 4, which ditched its entire single-player campaign in the same year that it launched Call of Duty’s first battle royale experience, Blackout. Developer Treyarch never said the campaign was cut to work on the battle royale mode, but people themselves made that connection.

More recently, however, Activision has provided a template for a big FPS series having its cake and eating it too. Before Call of Duty: Warzone was released, some wondered if the Call of Duty community could sustain two major console/PC releases at the same time with Warzone and Modern Warfare. As it turned out, both games thrived. They did not cannibalize each other.

In fact, Activision management has said the success of the free-to-play Warzone encouraged players to pick up the premium Call of Duty: Modern Warfare and now Black Ops Cold War. Activision has created a behemoth that feeds itself in a cycle, and the company is reaping the benefits. One would have to imagine that the executives at Microsoft have been keeping an eye on Warzone (and other FPS games in the market) to plan out their own strategy for Halo Infinite.

There is also the matter that Microsoft may not be interested in chasing a trend but instead creating something new. Making a splash in the battle royale space isn’t easy, after all. Chasing a trend like battle royale is antithetical to what Halo is all about in the eyes of many, and it’s led the franchise down some challenging paths before. Halo 4’s multiplayer was widely criticized for chasing trends by adding things like sprint and loadouts, mechanics that were borrowed from other popular franchises. People seem to want to see 343 blaze a new trail instead of follow a path.

Halo Infinite design lead Jerry Hook recently said in a video that 343 is trying to strike a balance between respecting Halo’s rich legacy and taking steps to make sure the franchise “doesn’t become an amalgamation of what the market is currently doing. But that what makes Halo unique remains unique for our players, our community, and for the industry.”

If Halo Infinite doesn’t include a battle royale mode, the possibilities are potentially even more exciting. With Halo 5, 343 ushered in the MOBA-style mode called, of all things, Warzone, and it was a breath of fresh air for the series that stagnated with Halo 4’s multiplayer. No one saw Warzone coming. New ideas are the lifeblood of any creative endeavor, and it should be expected for a franchise like Halo to deliver something meaningful and exciting for multiplayer beyond the tried-and-true (and very fun and important!) head-to-head Slayer mode.

The counterargument to be made is that Halo Infinite would not be chasing a trend by adding a battle royale mode but instead reacting to the market as it stands today. Fortnite reacted to the success of PUBG and others, and it became a juggernaut. Call of Duty: Warzone and Apex Legends also did not break new ground completely, instead opting to take what makes their own franchises excellent and apply them to battle royale to appeal to a new set of users.

For the team at 343 to not even consider a Halo battle royale mode–or potentially a separate standalone game, however–would be surprising to me, and that’s because Halo already has an excellent formula that is seemingly tailor-made for battle royale.

The Halo franchise has a rich and esteemed legacy when it comes to the recipe for a good battle royale game: a huge variety of weapons, locations, and vehicles, as well as tight controls and shooting mechanics that feel good and fair. Thinking about it that way, Halo as a franchise has the opportunity to excel and thrive in a battle royale context if executed properly.

It’s exciting to think about dropping onto a massive Halo map with distinct areas from across the Halo universe, stomping around the battlefield in a Wraith, or zipping by at high speed in a Mongoose with a gunner on the back, firing at enemies as they pass by.

Some of the most fun I’ve ever had playing Halo has come in Big Team Battles, where 16 players square off on giant maps with vehicles and powerful vehicles. The high-octane, white-knuckle action of these modes could be a template for a Halo Infinite battle royale. Halo’s large-scale modes consistently deliver the kind of because there are so many possibilities for what can happen.

Layered on to that could be some form of a battle pass–which Halo: MCC already has–where you can unlock new cosmetics and other content to customize your character. I would be shocked if Halo Infinite’s standard multiplayer doesn’t have some kind of battle pass-style progression system when it releases this fall–as its multiplayer component will exist as a seperate free-to-play game that generates revenue in part from microtransactions.

Even though Halo has some of the best shooting mechanics, most unique map layouts, and excellent weapons and vehicles, I personally don’t believe Halo Infinite needs to have a battle royale mode to succeed in 2021. I’m more excited to see 343 branch out and try something new and unexpected with a large-scale multiplayer mode in Halo Infinite, and I hope 343 delivers.