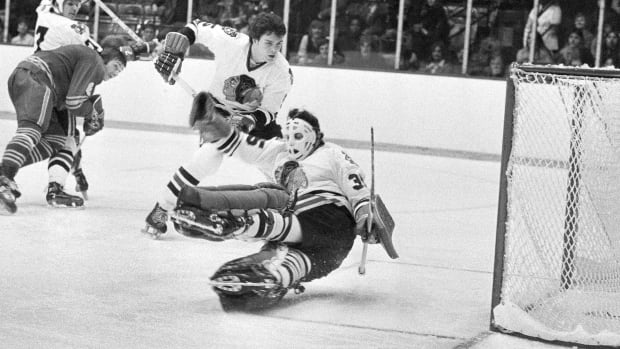 Tony Esposito, a Hall of Fame goaltender who rose to fame with Chicago, has died at 78. The team announced on Twitter that Esposito died Tuesday after a battle with pancreatic cancer.

Tony Esposito — the pioneering Hall of Famer who spent almost his entire 16-year NHL career with Chicago — has died following a brief battle with pancreatic cancer, the team announced Tuesday. He was 78.

Esposito made an immediate mark on Chicago and a lasting impression on the NHL.

Esposito debuted with Montreal during the 1968-69 season and appeared in 13 games. He was then left unprotected, with the Canadiens deep in goalies, and taken by Chicago in an intraleague draft for $25,000 US. It was an investment that paid immediate dividends for a team that was coming off a last-place finish in its division.

Esposito helped lead Chicago to first place, showcasing his butterfly style to post a 2.17 goals-against average and 15 shutouts, still a modern record for an NHL goalie. He won the Calder Trophy as the NHL’s rookie of the year, as well as the Vezina Trophy given to the top goaltender. He also won the Vezina in 1972 and 1974.

“Tony was one of the most important and popular figures in the history of the franchise as we near its 100th anniversary,” Chicago chairman Rocky Wirtz said.

“Four generations of our family — my grandfather Arthur, my father Bill, my son Danny and I — were blessed by his work ethic as a Hall of Fame goalie, but more importantly, by his mere presence and spirit.”

The Esposito family called him a “Hall of Fame husband, father, and grandfather.”

“Chicago felt like home from the time Tony first arrived in 1969, thanks to the Wirtz family and those 18,000 Chicago fans who treated him like family every night at the Stadium, win or lose or tie,” the family said in a statement.

We are saddened by the passing of Team Canada legend Tony Esposito, who wore the 🍁 in the 1972 Summit Series and 1977 #IIHFWorlds.

We send our condolences to his family and friends. ❤️ pic.twitter.com/4GXaHBUVUU

Esposito was from Sault Ste. Marie, Ont., just across the St. Mary’s River from Michigan’s Upper Peninsula, and he helped Michigan Tech to an NCAA championship in 1965. His older brother, Phil, was a star in his own right, a Hall of Fame centre who played 18 seasons in the NHL.

The younger Esposito’s first NHL start was Dec. 5, 1968, against Boston — and his brother. Phil Esposito scored twice on his younger brother, but Tony made 33 saves and the game ended 2-2.

In a statement, NHL Commissioner Gary Bettman extended his condolences to the Esposito family.

“The National Hockey League … and the city of Chicago lost a beloved member of the hockey family earlier today with the passing of Tony Esposito,” Bettman said.

“From his arrival in the Windy City in the late 1960s through an illustrious playing career and decades as a franchise icon, Tony left an indelible mark — both on the ice and in the community — over the next 52 years.

“Beyond the individual awards — and there were many, including a Calder Trophy, numerous All-Star and Vezina Trophy recognitions, and ultimately election to the Hockey Hall of Fame — it was Esposito’s style, charisma and heart that endeared him most to hockey fans not only in Chicago but across the NHL. ‘Tony O’ was a fierce competitor who also took great pride in being an entertainer, whether it was with his pioneering butterfly style during his playing days or interacting with fans across the League as one of this game’s great ambassadors.

“The hockey world will miss him greatly.”

Esposito helped lead Chicago to the playoffs in 14 seasons. Chicago reached the Stanley Cup Final in 1971 and 1973, losing each time to his former team, Montreal.

Chicago retired Esposito’s No. 35 on Nov. 20, 1988, and paid tribute to him again on March 19, 2008. He was named a team ambassador in a pre-game ceremony attended by franchise icons and former teammates Bobby Hull, Stan Mikita and Denis Savard as well as his brother.

“It’s a great feeling to be on this ice again — really miss it, I’ll tell you that,” Esposito said at the time, as the crowd chanted his name. “It’s a pleasure and an honour to be back [with Chicago].”

Esposito also served as general manager of the Pittsburgh Penguins and as chief scout in Tampa Bay, where he was hired by his brother. Phil is 79 and does radio work for the Lightning, a team he helped found.

“Tony was a founding, cornerstone member of the Lightning family who was a fixture at games and, along with his brother Phil, played an integral role in laying the groundwork for a successful franchise in the Sunshine State when many thought it was impossible,” the Lightning said in a statement. “His role cannot be understated. Tony was a true legend on the ice and off of it.”

“He exuded leadership and class, while being one of the most dominant players ever seen at his position,” said Wilson, who is the San Jose Sharks’ general manager.

Esposito is survived by his wife Marilyn, sons Mark and Jason, Mark’s wife Kim and their children Lauren and Kamryn.