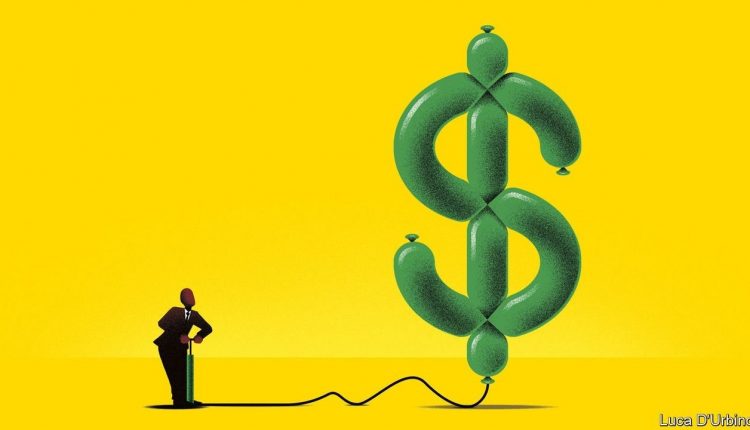 How America Inc is coping with rising inflation

PROPERTY INSURERS price policies today but face payouts a year from now. That makes their profits hostage to inflation. As swathes of America’s economy have begun rapidly reopening for business in recent weeks, thanks to falling rates of covid-19 infections and rising ones of vaccination, William Berkley has been paying close attention to prices of building materials and anything found inside homes, from lamps to laptops. The replacement value of a home in America may have leapt by 20%, year on year, Mr Berkley thinks. Since the founder of WR Berkley launched his insurance firm over half a century ago, he has never witnessed a time like the past year—not even in the inflationary 1970s.

Economists debate whether the rapid climb in consumer prices, which rose at an annual rate of 5% in May, the fastest since August 2008, will prove as enduring as 50 years ago. Input prices for producers shot up by 6.2% in April, year on year (see chart 1). On June 9th Chinese beancounters reported that producer prices in the world’s manufacturing powerhouse rose by 9% in May, year on year, the biggest jump in 13 years.

The Federal Reserve insists that higher inflation will be “transitory”. Partly for that reason, chief executives of many big American companies are wary of discussing inflation in public. When Darius Adamczyk, who heads Honeywell, a huge industrial conglomerate, mentioned during an earnings call in May that inflation “is here and it is probably a lot more pronounced that people think”, his comment went viral among financial types on the internet.

Their coyness notwithstanding, many of Mr Adamczyk’s and Mr Berkley’s fellow bosses are bracing for a period of higher costs. Some inputs remain scarce while clogged supply chains are being reconfigured for a reopening economy. At the same time, demand is surging from American consumers, who are flush with unspent pandemic-year savings, augmented by stimulus cheques from the government. To deal with the resulting price pressures, firms are adapting their corporate tactics accordingly.

In the 1970s companies responded to rising input prices in a number of ways. First, they passed as much of the higher costs as possible on to customers. When that strategy was exhausted, they turned to automating operations or moving them to places with cheaper labour, either elsewhere in America or abroad.

Businesses are now dusting off that old formula, starting with price rises. In April Coca-Cola told analysts that its soft drinks are about to become more expensive, and Whirlpool warned that the same was going to happen to its washing machines and other appliances. Procter & Gamble plans to raise the prices of some of its consumer products by “mid to high single digits” in September. On June 8th Chipotle confirmed it had increased menu prices at its Mexican-grill restaurants by as much as 4%. Some companies, such as Royal Canin, which makes pet food, have kept prices steady but cut the size of their portions.

Michael Goldman, who runs Carolina Casting, which makes furniture in North Carolina, has seen the cost of resin shoot up by 75%, of lumber three- to fourfold, and of a container to ship materials from Asia by $16,000, to $20,000. He has increased his rates for customers twice so far this year. WR Berkley began repricing its premiums upwards last year but has accelerated that in the past couple of months. Insurance brokers who sell the company’s policies have not grumbled; they expected as much, says Mr Berkley.

Pent-up demand allows companies to get away with even large price rises. As a result, returns, which held up in the first quarter, are expected to do so again in the second, says Jonathan Golub of Credit Suisse, a bank. Big firms’ net margins have actually been rising. This suggests that as yet, far from forcing companies to absorb the extra costs, inflation may have given them some extra pricing power.

Plenty of businesses are, however, preparing for a time when they can ratchet prices up no longer. Sridhar Tayur of the Tepper School of Business at Carnegie Mellon University, who consults with three large companies, says that each of them is redesigning products to eliminate waste and streamline manufacturing. Mr Adamczyk said in January that he had established an internal Honeywell task-force to respond to inflation (though he was vague about what exactly it might do). Lineage, a logistics firm with 200 cold-storage warehouses across America, says it has created several such teams. One focuses on avoiding supply bottlenecks in critical construction projects, another on recruiting workers in a tight market.

Rising labour costs are chief executives’ biggest headache by a long way. Some companies are trying to keep a lid on future wage increases by using one-off inducements, such as signing bonuses, to attract new recruits. Most, though, have no choice but to raise pay. Andrew Obin of Bank of America reckons that American manufacturers are paying existing employees about 4% more than a year ago. But, he estimates, workers can expect a pay rise of 13% if they switch jobs. Wages for non-supervisory workers rose at an annualised rate of nearly 7% between April and May, according to the Bureau of Labour Statistics.

Despite a willingness to pay workers more, many firms are having trouble filling vacancies. Nearly half of American companies complain that they are finding it difficult to fill one or more jobs (see chart 2). “It is hard to tell how much it costs to hire someone because you can’t find anyone,” sighs Mr Goldman. His “help wanted” ads often go unanswered; many of those who respond fail to turn up for interviews. Given Americans’ apparent reluctance to get back to work, whether because of continued fears of covid-19, generous unemployment insurance, or both, wages may have further to rise.

If inflation does prove stickier, some companies will contemplate shifting production to places with more plentiful and cheaper labour. All three firms advised by Mr Tayur, for example, are pondering whether and where to move, within America and farther afield. Others may want to get rid of human workers altogether. America Inc has ramped up business investment by 15% this year. Part of this is going towards automation, and not just in manufacturing. Erik Gordon of the University of Michigan’s Ross School of Business points to restaurant chains, some of which are installing automatic grills and developing apps that enable diners to place orders remotely rather than at the counter, which allows fewer staff to focus on making and serving food. As hotels reopen, robot floor-cleaners are becoming more common.

Many such productivity-boosting investments make good business sense even in a low-inflation world. That is the outcome which many chief executives will still be hoping for. It is certainly what policymakers are banking on. In the 1980s the Securities and Exchange Commission required companies to publish balance-sheets and income statements both in nominal terms and adjusted for inflation. This requirement has been watered down over the years. In November the markets regulator appears to have all but binned the last explicit vestige of it. It would be ironic if this now proved premature. ■

Activist investors are both greening and greying