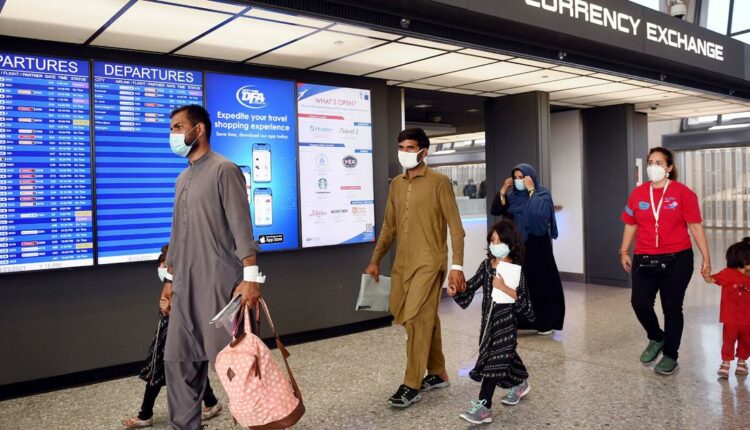 The surprisingly swift Taliban conquest of Afghanistan this month and frantic evacuations from Kabul have ignited a national conversation about U.S. efforts to resettle Afghans who aided American forces during the 20-year conflict.

Providing refuge to Afghans who assisted the American war effort is a rare immigration policy with broad public support, including among both Republicans and Democrats.

But the Biden administration’s plan to airlift and relocate wartime allies from Afghanistan faces serious logistical and political challenges, including the rapidly approaching American military exit from the country on August 31.

The effort has also raised questions about how many at-risk Afghans the U.S. will be able to evacuate, who qualifies for refuge, where those who make it out will be resettled, how they’ll be vetted and what will happen to them once they set foot on American soil.

Special Immigrant VisasUnder programs established by Congress with broad bipartisan support, certain Afghans who helped the U.S. war effort could be eligible for a Special Immigrant Visa (SIV), which allows approved applicants to move to the U.S. permanently with their spouses and children.

One program is designed to provide U.S. safe harbor to Afghans who served as translators or interpreters for the U.S. military. Another larger program allows Afghans who worked for the U.S. government, its contractors or NATO to obtain the special visa if they meet certain requirements.

While the smaller program for interpreters and translators is permanent, the second classification is temporary and will expire when all allotted visas are issued. In July, Congress added 8,000 additional visas to the broader classification, bringing the total to 34,500 visas.

Other ways for Afghans to qualify for refugee resettlementAfghans being evacuated from Kabul who are not eligible for the special visas could still qualify for U.S. refugee resettlement if they are waiting in third countries and fear persecution if returned to Afghanistan. Earlier this summer, the Biden administration created a new refugee category for Afghans who worked with U.S.-based news outlets and nongovernmental groups.

Advocates and some lawmakers want to speed up the time-intensive application process for these visas to move people out more quickly, before the deadline.

They’re calling on the Biden administration to use an immigration tool known as “humanitarian parole” to allow vulnerable Afghans, such as women leaders, to enter the U.S. without a visa. Those paroled could potentially be eligible for other immigration benefits like asylum if they can just reach the U.S.

A volunteer helps Afghan refugees to board a bus after arriving on a flight at Dulles International Airport in Chantilly, Virginia on August 23, 2021.

Applicants must also file an application with U.S. Citizenship and Immigration Services. Once they’re approved, they need to submit additional paperwork for visas, including for eligible family members.

They must then be interviewed in person at a U.S. embassy or consulate and undergo security screenings and medical checks. Then, their visas are issued, and they may travel to the U.S.

What problems has the special visa program faced?The 14-step Special Immigrant Visa process has long been plagued by chronic and significant delays, causing some cases to take years to adjudicate — well beyond the nine-month time limit dictated by Congress.

A 2018 lawsuit challenged these “unreasonable” delays and convinced a federal court in 2020 to require the government to submit reports on visa applicants whose cases remained pending beyond nine months.

In June 2020, the State Department inspector general released a report saying the months- and years-long delays were the result of limited staffing levels and inadequate coordination between the different government agencies involved in the program.

During President Obama’s second term, the U.S. ramped up the processing of Special Immigrant Visas, issuing over 38,000 visas to Afghan and Iraqi allies. In fiscal year 2017, the U.S. issued a record high 18,400 special visas, according to government data.

Those numbers, however, dropped during the subsequent years of the Trump administration, which granted just 7,800 special visas in 2018, 10,000 in 2019 and 8,000 in 2020. In January, the Biden administration ultimately inherited 17,000 pending applications for special visas.

And the coronavirus pandemic, which halted consular and visa processing last year, exacerbated these longstanding challenges.

In-person interviews at the U.S. embassy in Kabul were suspended between March 2020 and this past February. After resuming, the embassy was forced to halt in-person interviews this summer due to a coronavirus outbreak. U.S. officials subsequently started virtual interviews.

How are visa applicants being processed?On July 30, two weeks before the fall of Kabul, the U.S. started “Operation Allies Refuge,” a plan to airlift special visa applicants and their families from Afghanistan.

The first Afghan allies admitted into the U.S. this summer — who had already completed security screenings — were housed at the Fort Lee Army base in Virginia. Forts Bliss and McCoy in Texas and Wisconsin have also begun housing visa applicants and their families.

Other visa applicants and vulnerable Afghans airlifted from Kabul since the Taliban takeover of the country are being sent to U.S. military sites in Qatar, Bahrain, Kuwait and Germany. U.S. officials say Afghans who have yet to undergo security checks will remain in third countries until that processing is completed.

Afghan people queue up to board a U S military aircraft to leave Afghanistan, at the military airport in Kabul on August 19, 2021 after Taliban’s military takeover of Afghanistan.

The Biden administration has yet to say how many Special Immigrant Visa applicants and at-risk Afghan it plans to resettle in the U.S. It has also been in negotiations with third countries like Canada, Albania and Colombia that have expressed interest in offering refuge to evacuated Afghans.

As of August 16, the U.S. had admitted more than 5,300 immigrants under the special visa program this fiscal year, according to federal data shared with CBS News. In an interview with ABC News last week, President Biden estimated there are 50,000 to 65,000 Afghan allies, including their families, in need of evacuation.

While Mr. Biden has vowed to come to aid those who helped the U.S., many Afghans who are terrified of the Taliban’s retribution are struggling to reach Kabul’s airport.

What happens to those resettled in the U.S.?Afghans who enter the U.S. under a Special Immigrant Visa will receive permanent residency, or a green card.

Like refugees, special immigrants are, for a limited time, allowed to use government-funded social programs designed to facilitate their integration into American society, including cash and medical assistance, case management and educational services to learn English.

Federal officials and resettlement agencies have been sending volunteers to the military sites housing evacuated Afghans, who will stay there until they are tested for the coronavirus and provided medical checks, work authorization, green cards and travel assistance.

California, Texas, Virginia and Washington are the states that have received the most special immigrants from Afghanistan since October 2020, according to State Department figures.

Acer Nitro 5 hands-on: This RTX 3080 laptop might be a screaming value