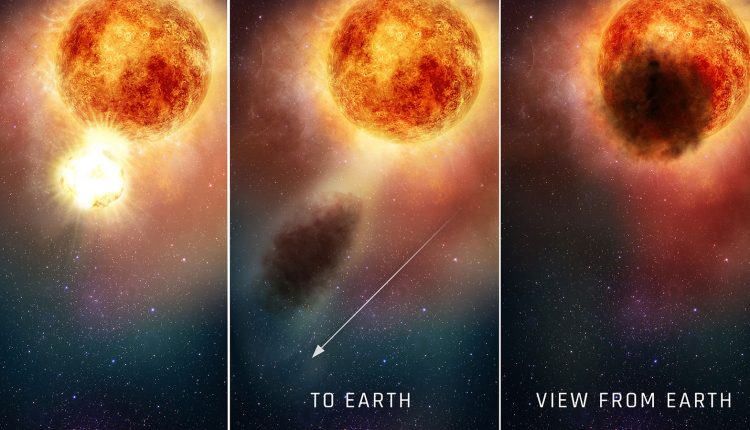 It’s been called one of the most famous stars of all time: Betelgeuse (pronounced “Beetlejuice,” like the movie) is part of the well-known Orion constellation and is usually the 10th-brightest star in the heavens, visible even to the naked eye.

“Betelgeuse over time has been more famous than Mickey Mouse, or any human alive today,” says Andy Howell, staff astronomer at the Las Cumbres Observatory and a physicist at the University of California, Santa Barbara in an email interview. “That’s because over hundreds of thousands of years, our human nighttime entertainment was looking at the night sky.”

But in October 2019, Betelgeuse’s star mysteriously began to dim. Its drop in brilliance was apparent even to casual observers. Astronomers were bewildered by its sudden shift in mood. Some suspected that Betelgeuse was running out of fuel, perhaps going supernova. Stars that go supernova create the most powerful explosions that occur in space.

However, more recent research indicates that Betelgeuse isn’t necessarily on the verge of death. It may simply have produced a debris field of sorts that temporarily blocked its incredible brightness.

“Betelgeuse is a red supergiant star, about 12 times the mass of the sun, but a whopping 900 times the diameter,” says Howell. “That means that if Betelgeuse were where the sun is, it would easily swallow Earth and extend out to beyond the orbit of Jupiter.”

He adds that red supergiants are stars at the end of their lives, after they have fused all the hydrogen to helium in their cores. As they burn heavier and heavier elements, their cores contract and their outer layers puff up to extraordinary dimensions.

Betelgeuse has always been known for its variable brightness. Generally, those fluctuations occur semi-regularly and in only modest amounts. Howell says this happens because it pulsates as the stellar atmosphere churns like a pot of boiling water, throwing up huge blobs of material.

“But last year it started to dim noticeably to the naked eye and got quite dim for a long time in a way that had not been seen in more than a century,” he says. “It was a mystery until observations revealed that there was a huge dust cloud covering a large fraction of the star.”

“The cause of the dimming is under discussion and argument,” emails Edward Guinan, an astrophysics and planetary science professor at Villanova. “The dimming could be due to the ejection of gas that cooled to dust and blocked the star’s light. On the other hand the recent dimming (called the ‘great dimming’ or ‘great fainting’) occurred at the time expected on the 430-day periodicity so in this case would be related to a cooling caused by pulsation or the presence of a super-large convection cell.”

Guinan adds that he and his colleagues think the dimming was caused by an extra-energetic pulse or the upwelling of giant convection cell and not new dust. “Continuing observations should answer this question soon,” he says.

The Life and Death of a Supernova

Images of Betelgeuse’s dimming were captured by the Hubble Space Telescope. “Hubble researchers suggest that the dust cloud formed when superhot plasma unleashed from an upwelling of a large convection cell on the star’s surface passed through the hot atmosphere to the colder outer layers, where it cooled and formed dust grains. The resulting dust cloud blocked light from about a quarter of the star’s surface, beginning in late 2019. By April 2020, the star returned to normal brightness,” NASA stated in a press release from August 2020.

But although Betelgeuse’s recent dimming doesn’t seem to incident its imminent death, its end is coming, someday.

“Betelgeuse is going to explode one day as a supernova,” says Howell. “That could happen tomorrow, or it could be in 100,000 years. We can’t tell. But when it does it will be spectacular. It could get about as bright at the quarter moon — so bright you could read by it at night. It will stay really bright for months, and you should even be able to see it in the daytime for about a year.”

Supernovae in the past certainly left profound impressions on humans. Chinese astronomers documented a supernova from the year 1054, and it resulted in the Crab Nebula, one of the more famous bodies in the night sky.

So, does Betelgeuse’s death sound like the blockbuster of the year? Don’t hold your breath. No one knows when the star will finally meet its maker.

“Sadly, we haven’t had a supernova in our galaxy witnessed by humans in more than 400 years,” says Howell. “Just as Galileo was perfecting the telescope in 1604 one [supernova] happened, and he was able to witness it and lecture about it.”

Guinan, too, hopes he’s around to witness what’s sure to be a thrilling spectacle. He says that he’s been carrying out photometry of Betelgeuse for more than 40 years, and he’s continually fascinated in part because it’s so hard to predict what this strange and mysterious star will do next.

“Betelgeuse is a huge unstable star on the verge of becoming a bright supernova,” he says. “Even though the odds of seeing this happen in my lifetime are very, very low. I nevertheless always keep an eye on it — just in case (on a longshot) it goes supernova. I would love to see this.”

If you’ve never seen Betelgeuse, here’s how to find it:

“Just look for three close together equally spaced stars — they are unique in all the sky. That makes up the belt of Orion,” says Howell. “There are four bright stars above and below those forming a rectangle that make up the shoulders and legs of Orion. If you’re in the Northern Hemisphere, the upper left star (which for Orion would be his right shoulder) is Betelgeuse. You can tell because it is red and bright.”

What’s Next for Silicon Valley?

Becoming a Nurse on a Budget: Money-Saving Strategies and Funding Options to Consider

At Home Learning 101: How To Get The Most Out Of It

6 Tips for Becoming a Great Tutor to Kids

Encouraging Teachers of Color to Become Superintendents According to Dr. Shawn Joseph

The Unusual Connection Between Beavers, Permafrost and…