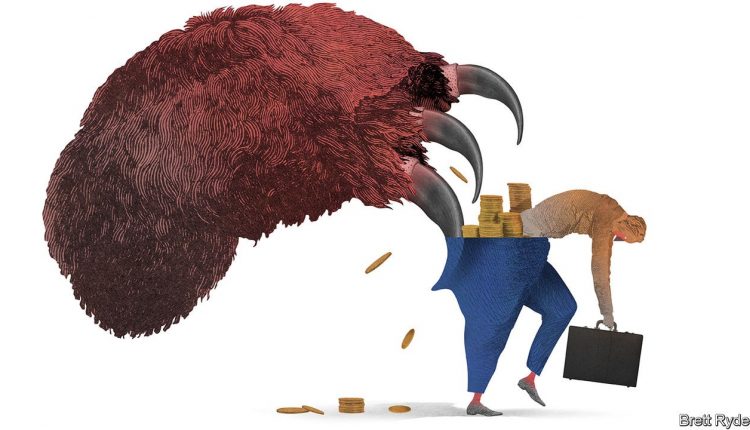 IF BUSINESS HAD a Moses, “Thou shalt link pay to performance” would be on his tablet. Compensation committees have, however, tended to stick to a narrow reading of the commandment. Whereas they reward good behaviour, deterring the bad is an afterthought. Worried that this may lead bosses to adopt a mentality of “heads we win, tails shareholders lose”, boards are rethinking their priorities—partly in response to pressure from regulators and investors, but also to shifting social winds. Perfectly balanced incentives remain as elusive as the promised land. Still, measures designed to ensure that misconduct does not pay are becoming central to the debate about how to craft bosses’ salary plans.

The most striking change of recent years has been the rise of the “clawback”. This is a provision in pay plans that gives the board the right (or, less commonly, an obligation) to yank bonuses or stock awards given but later found to be unjustly earned. A prototype, contained in America’s Sarbanes-Oxley reforms of 2002, required retrieving pay from chief executives and chief financial officers whose sins caused accounting restatements. The idea gained traction after the global financial crisis. The European Union mandated recouping money from wayward bankers. In America Congress told regulators to craft a new clawback rule. While they mulled this, big firms got the message and began to draw up such policies voluntarily. Some 93% of those in the S&P 500 index now say they have one covering cash bonuses, equity awards or both, according to ISS, a proxy-advisory firm, up from a small minority before Sarbanes-Oxley.

As such provisions have grown in popularity, two things have happened. First, the list of misdeeds covered has lengthened. What initially applied solely to criminal financial conduct now extends to almost anything that might damage a firm’s reputation. That includes creating a toxic corporate culture, sexual harassment and “inappropriate” personal relationships; cupping backsides is taken as seriously as cooking books.

The second development is that more firms—albeit still a minority—are plucking up the courage to invoke the provisions. Wells Fargo clawed back $28m from John Stumpf on top of the $41m he forfeited when he resigned as CEO of the lender in 2016, after a probe concluded he had engendered a culture that encouraged employees to open fake accounts to lift sales. Goldman Sachs tapped a dozen current and former executives for $175m last year to help ease the pain of whopping fines over the investment bank’s role in the 1MDB embezzlement scandal. McDonald’s is trying to recoup $57m of severance pay from its ex-boss, Steve Easterbrook, who was fired over sexual relationships with underlings.

The Goldman Sachs case encapsulates the pros and cons of clawbacks. The firm won plaudits for its stance; here was a Wall Street giant willing to make top brass pick up some of the tab for wrongdoing. But what initially seemed a bold move became an embarrassment when Gary Cohn, its former second-in-command, who had cashed in his pay awards on joining the Trump administration in 2016, demurred. The stand-off ended when Mr Cohn agreed to pay a sum, reportedly $10m, to charity. Much as the bank tried to spin this as fair, it was made to look impotent.

The episode underlines that, when it comes to compensation, he who has already paid the piper finds it harder to call the tune. Goldman Sachs’s board could have shown more spine and seen Mr Cohn in court, if only to signal it was serious about holding grandees to account. That, though, would have been costly and risky. Lawyers’ fees might have exceeded what Mr Cohn owed as they wrangled over what is “excessive” pay, “inappropriate” behaviour or “inadequate” oversight in a scandal that involved decisions at many levels. The court might have sided with Mr Cohn, who was never personally accused of wrongdoing. Boards must also consider potential bad publicity. McDonald’s was put on the back foot when Mr Easterbrook claimed it already had information about his liaisons, including sexually explicit emails, when it approved his severance package.

Unsurprisingly, then, some firms try to just put the mess behind them. GE decided last month not to claw back pay from an ex-boss, Jeff Immelt, after a huge write-off and a probe into disclosure policies led to a $200m fine for the industrial conglomerate. (He denies wrongdoing.) Drugmakers accused of stoking the opioid epidemic have also eschewed clawbacks. Such clauses may deter some executives from reporting misconduct. And broadening what is considered wrongdoing creates ambiguity. Some firms include behaviour “embarrassing” to them. Might a CEO expressing exotic political views count?

Still, deterrence efforts are proliferating. One popular policy is to lengthen deferral periods for pay, by a year or more for cash bonuses, and a similar period beyond the vesting date for equity grants—in some cases until after the executive leaves the firm. Though less dramatic than clawbacks, this has the advantage of reducing the chance that the money has left the company before alleged misbehaviour emerges. Last month CVS Health, other pharmacy chains and even a few drugmakers (like Bristol Myers Squibb), agreed on a set of extended-deferral principles with a group of investors who had threatened to agitate over the firms’ role in the opioid crisis.

Clawbacks, too, will spread. For one thing, the pandemic recession has stoked anger over excessive executive pay—particularly perceived pay-for-failure such as Boeing’s $62m payoff to Dennis Muilenburg, who presided over the bungled response to two crashes of its 737 MAX passenger jets. And big investors like such provisions. In just a few years BlackRock, the world’s biggest asset manager, has gone from tepid to wholehearted support for them. What better way to focus executives’ minds than to make it clear that what the board giveth, the board can take away? ■

Leaders Who Make a Difference: A Special Live “Issue” of HBR