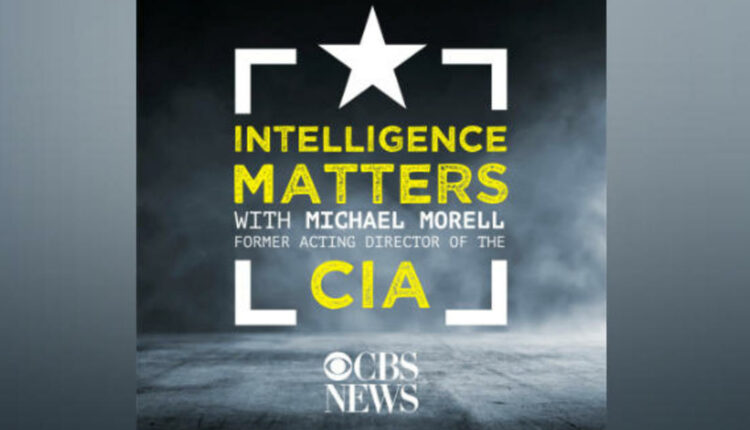 Download, rate and subscribe here:  iTunes, Spotify and Stitcher. “Intelligence Matters” is a weekly podcast about national security and policy hosted by former CIA acting director and CBS News national security contributor Michael Morell. Each week, users can listen to conversations between Morell and some of the world’s leading intelligence and national security officials and experts. The podcast|, which launched in 2017, was previously produced in partnership with The Cipher Brief, a website dedicated to national security topics.

China expert John Culver on Beijing’s military prowess – “Intelligence Matters”In this episode of Intelligence Matters, host Michael Morell speaks with John Culver, a career CIA analyst, former National Intelligence Officer for East Asia, and leading expert on the Chinese military. Culver and Morell discuss the decades-long modernization of the People’s Liberation Army and the prowess China has attained across multiple war-fighting arenas. Culver offers insights into Xi Jinping’s rise to and continued hold on power, and describes the many challenges of engaging Beijing in a multi-polar, interconnected global system.

Mar 25 |  What a Seminal Survey Tells Us About the Views of Arab Youth: Sunil John

Feb 17 | Gayle Tzemach Lemmon: The women who fought against ISIS – an unusual experiment in women’s equality

Feb 10 | Past U.S. failures in dealing with Iran and how to approach a new nuclear deal

Jan 6 | Will Wechsler: Biggest factor in U.S.-Middle East relations is perception that U.S. is withdrawing

July 29 | Author Robert Draper on what led the U.S. to war in Iraq – transcript

June 10 | Transcript: Franklin Foer – Putin and the the 2020 presidential election

May 8 | Bonus episode – Analysis: The national security implications of COVID-19

Dec 18 | Transcript: Susan Rice on her career, U.S. foreign policy and America’s role in the world

Dec 11 | Transcript: Adam Smith on the work of overseeing the U.S. military

Dec 4 | Transcript: James Stavridis on the value of alliances

Aug 7 | Michael Allen: Office of the DNI: What it does: Transcript

Oct 3 | Chris Johnson on the future of the U.S.-China relationship

Aug 29 | Mark Warner on securing elections, combating disinformation: “We’re not there yet” | Transcript

Jul 24 | Pakistan’s former ambassador says his country must get out of the business of jihad: Husain Haqqani

Jun 19 | James Clapper on internal and external threats to the U.S.

May 29 | John McLaughlin on helping families of the fallen

May 22 | Undercover spy to public official: Rep. Will Hurd on global threats and domestic challenges

May 15 | The Iran nuclear deal: What in the world happens next?  James Jeffrey

May 8 | Negotiating with North Korea: The players, the stakes and the surprises: Joseph DeTrani

May 1 | The relaunch – with Gen. Michael Hayden

Is a Surface Pro 8 coming soon? A new Windows 11 feature adds to the evidence