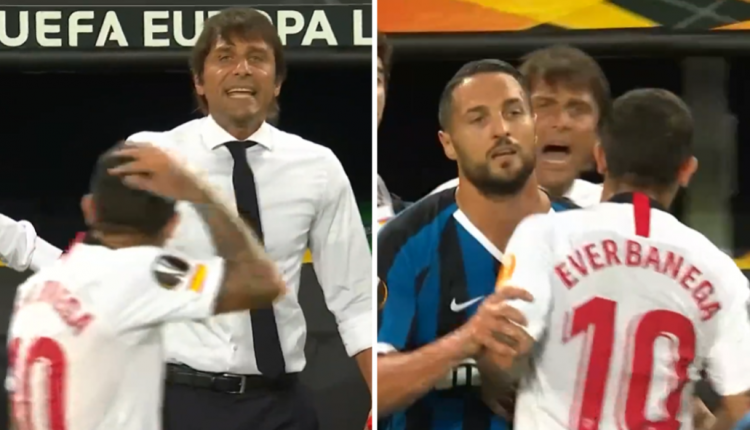 Inter Milan boss Antonio Conte has played down his row with Ever Banega during the Europa League final after the Sevilla star took a swipe at his ‘wig’, saying what happens on the pitch stays on the pitch.

The Italian side endured a difficult night in Cologne on Friday despite taking the lead, with a brace from Luuk de Jong and an own goal from Romelu Lukaku following a bicycle kick from Diego Carlos – who was lucky not to be sent off – securing a 3-2 win for Sevilla.

The match was a feisty and frantic affair, with Conte even shown a yellow card in the first half after a heated argument with Banega.

Conte was furious with a decision and Banega jumped on the opportunity to wind him up, with pitch-side reporters for both Sky Sport Italia and La Gazzetta dello Sport reporting the Argentine shouted: ‘Let me see if that wig is real’ and ruffling his own hair.

They had more words for each other at full-time, but after the game Conte did not want to speak about the row and suggested what was said was simply in the heat of the moment.

Asked about the incident at his post-match press conference, Conte replied: ‘I was a footballer, and what happens out on the pitch stays on the pitch.

‘I don’t think it’s any of your business what went on with Banega, if I’m completely honest.’

Inter had cause for complaint when last man Diego Carlos brought down Lukaku inside the box but was not shown a red card despite failing to make a genuine challenge for the ball, though Conte did not take umbrage with the decision.

He continued: ‘Now, at the end of the game, it’s very difficult to talk about one specific incident. But if you win the penalty, and if there is a red card – if indeed it was a red card – then naturally the match would have become a lot less tough than what it proved to be.

‘The referee made a decision in the end, that’s the way he read the situation, and there’s also VAR – but we know the VAR is used differently in every single country and everyone has their own viewpoint on that.

‘But it was a balanced match between the two teams, two very good teams indeed, one specific incident could have changed the balance of the game.