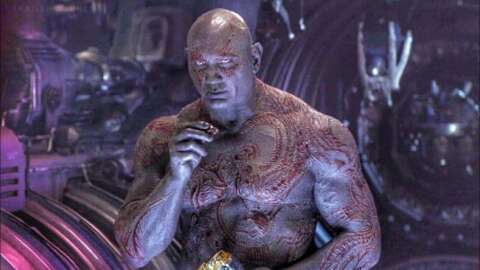 It’s hard to imagine the Guardians of the Galaxy films without Drax the Destroyer, and it’s even harder to imagine anyone other than Dave Bautista bringing the ultra-literal strongman to life, but it turns out that almost didn’t happen.

Director James Gunn is more active on Twitter than ever, offering fans of his work almost daily insight into his projects, and he’ll often answer fan questions with surprising candor and transparency. He took a moment off of shooting Peacemaker today to answer a few incoming queries.

“What’s a decision you had to fight tooth and nail for on a movie?” one fan asked. “Like looking back you still wonder why did the studio fight so hard against it?”

“I’d say hiring Dave Bautista on Guardians of the Galaxy Vol. 1,” Gunn replied. “The first thing Kevin Feige told me after seeing the first cut is how right I was about him.”

The whole movie was a long shot, the first time since Iron Man that fans looked at a Marvel Studios film and collectively wondered if the Marvel magic was strong enough to make such an obscure team work. Now, the whole crew, including Bautista’s quirky portrayal of Drax, are MCU stalwarts who featured heavily into the last two Avengers films and have a third standalone Guardians film on the way.

Gunn answered a few other questions, too. The hardest movie Gunn ever made was Super, the 2010 superhero-themed thriller starring Rainn Wilson and Elliot Page. Gunn described the experience as “grinding, hellish, uncomfortable days, averaging over 40 camera setups a day with one camera–one day we did 54,” he said, which is all thanks in part to the movie’s comparatively tiny $3 million budget. For contrast, Gunn said, big movies sometimes don’t even do ten camera setups. “It felt like sprinting for five weeks.”

Talking about his latest film, the upcoming DC film The Suicide Squad, Gunn confirmed that it has the most practical effects he’s ever done in a movie. How many? “Times five,” Gunn said. The Suicide Squad is complete and currently scheduled to hit theaters on August 6, 2021. The Peacemaker standalone show, starring John Cena, hits HBO Max in January 2022.