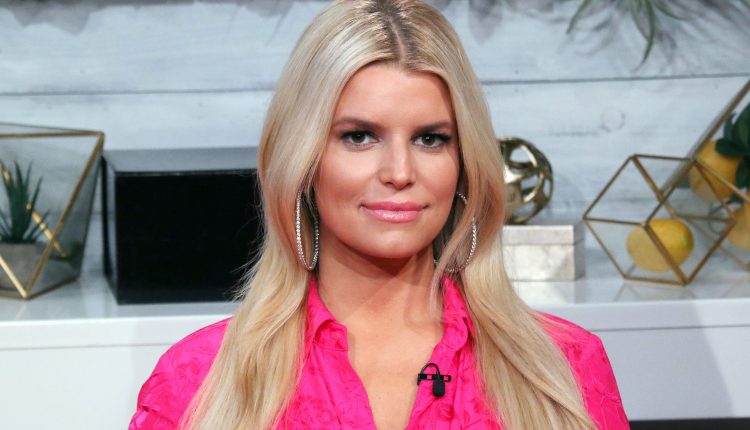 Jessica Simpson is working on being an open book—so much so that she titled her memoir that very term—and is on a mission to break down the fallacy that she has it all together. “I’ve never thought that perfection is attainable,” she tells SELF. “And I think that it’s important for people to know that and be reminded of that.”

In her memoir, which came out in February, Simpson disclosed a past history of sexual abuse, which contributed to an alcohol and stimulant addiction. In recent months, she’s shared more about the steps she’s taken to work through her trauma, including journaling, a tool the fashion mogul has turned to throughout the stress of the COVID-19 pandemic, and weekly date nights with her husband, Eric Johnson.

The star has also been inspired to speak out about her lifelong experience with eczema, a condition that has at times kept her from wearing certain clothing and even sharing photos of herself with her closest friends and family—let alone her 5.5 million followers on Instagram. Now, though, Simpson has found reprieve from eczema with a cream called EUCRISA. As a spokesperson for the brand, she’s sharing how it has helped her to feel more comfortable in her skin.

SELF caught up with Simpson, who walked us through her life with eczema, latest self-care routine, what she really thinks of her husband’s vegan cooking, and more.

SELF: It sounds like your journey with eczema has been a lifelong struggle. What made you want to open up about this now?

J.S.: I have had eczema since I was a kid. I struggled with it more toward the eighth grade, with mild to moderate eczema. And my memories of it are a little tough because I was a cheerleader. We were living in Texas, and everybody hugs in Texas. So, after a game, people would come up to me and hug me and ask me what was on my arms, like if I had bites. I would tell them it was a heat rash because I didn’t necessarily know. My mom and I went to a local drugstore and found some topical creams over the counter. They ended up working out pretty well, enough to where I felt more comfortable, but it was definitely something that I had to do daily.

I actually experienced an intense eczema flare after I had Birdie, my third child. I was holding her and Eric was taking a picture, and he was going to send it out to all of our friends on a mass group text. I looked at the picture and I was like, “What is on my arm, and how have I not noticed this? I know that I have a newborn and I haven’t really had time to focus much on myself, but I would think that I would have noticed this by now.” I wouldn’t let him send out the picture. And when you are holding your newborn, of course, you want to share it. So I kind of panicked. I called my doctor and he was the one who was like, “You need EUCRISA.” For me, it worked within two weeks, and I saw a major difference. During the summer, I usually didn’t wear T-shirts or tank tops. I was very insecure about it until I was prescribed EUCRISA.

In your memoir, you talked about childhood trauma and the toll it took on you. Did you learn any tools to help cope with trauma that might be helpful to others?

Trauma is a very real thing. I personally wish I would have not been ashamed of it. I wish I would have had the conversation with my parents way before I did. So that’s why I talked about it in the memoir, to let parents be aware that their children might not be speaking about this. Or if it’s something that you have gone through, you might have buried a lot of that inside of you and it’s important to talk through. I wanted people to know that I’m a normal person just living her life, and I’ve experienced a lot of the same things that other people have. I have found healing. And that healing was really remarkable for me.

I journaled so much when I was younger, and my memoir is based on a lot of my journals. I have hundreds of journals. I haven’t done it in years, but the pandemic definitely opened me up to my journal. Every morning during lockdown, I take time to open my journal. I think about resilience a lot. I say to myself: “What do I need today? I need resilience.” I talk through my thoughts. That way, I don’t suppress them. And that way I don’t project them onto my children or my family or my friends. I really just have a good confrontation with myself. And I am more self-aware and present with where I need to be in that moment, and I don’t have a lot of blockages in the way that can end up being an outburst or something. So I really get a lot out in my journaling every morning. And if I can’t sleep, if I am stressed out about something, I’ll journal before bed. I won’t journal in my bed because I’ll never go to sleep. But if I journal downstairs in my library, then it’s like, “Okay, you’re done.”

As a mother of young children, how are you talking to your kids about staying healthy and safe this school year?

Well, they are staying healthy and safe at home. They wear their masks if they’re going out and about, but that’s kind of rare. They are coping way better than I would ever expect. I’m talking about my two older children, because obviously my 16-month doesn’t know what’s going on. She thinks FaceTime and Zoom are a completely normal thing. So during every session I do, she’s like, “Hi.” Normally my son would be at baseball while my daughter is at gymnastics and they would rarely see each other. But through the pandemic, they’ve formed a really unique bond that’s been precious to watch, actually. And they teach Eric and me so much. They are resilient. They don’t have fear, and I don’t know if that’s because Eric and I are parenting okay, but they really do feel safe. And my daughter and I pray every night. She prays for the scientists to come up with a cure every single night. She prays for COVID to go away and for people who lost their jobs. She’s been so amazing through it and has taught me a lot. I’m like, “Okay, if she can say this, I can pray for this.”

That’s really cute! Are you going to be homeschooling?

Yeah. You have to create different boundaries with your children that you never thought you would have to have. We teach our children morals and values and how to be kind and sincere and genuine. But, oh my gosh, doing third-grade math nowadays is like doing it in seventh grade. I can’t believe these kids have to do this much at home. But they’re champions. They’re doing a great job. And Eric and I are here every step of the way. Eric does the math part because that’s not my specialty. [Laughs] I’m better with the English part and all the other stuff. I steer clear of math. I already got frustrated with math at the beginning of the pandemic and handed that one over.

Speaking of Eric, does date night exist in a pandemic?

The crazy thing is, and I don’t know why, but our kids go to bed so late during this pandemic. It will be 10:30, and we’re exhausted by the time the day is over for them. But Eric’s parents live five miles from here and my mom lives close by. So every Thursday, we’ll have a night together and the kids will be with their grandparents.

Do you just stay in and cook together and watch movies?

We don’t cook together because he’s vegan, and I don’t eat what he eats. I’m like, “What is that?” I’m not really into the tofu and stuff. I’ll make something for myself and he’ll make me a grilled cheese. He’s very good at making grilled cheese. But we normally just hang here. We don’t go out and about. I’m a homebody. I truly love being at home.

Has Eric tried to sneak a Beyond Burger into the mix and trick you?

Oh, I’ve almost been tricked but that didn’t work. [Laughs] I’m like, “What is this?” But Beyond Beef definitely is a staple at this house. My son loves my ground beef tacos, so I make Eric the Beyond Beef ones, and then I make the rest of the family the ground beef ones. I was making these pasta bake dishes the other day and I had to make them separate for Eric. I was like, “Oh, my gosh. This is exhausting.” He tried to convert me to veganism when we first started dating and that lasted all of one week, maybe two. I am not fulfilled. I need a corn dog!

How are you staying active right now?

Having your kids in isolation and being in the pool and being on the trampoline and going on family walks and visiting people’s horses down the street or their pigs… It’s hilly where we are so we’re constantly getting a workout. We’re exhausted by the end of the day.

How did you feel about turning 40? What makes that a cool age?

I haven’t said that it’s a cool age yet. [Laughs] I’m new to 40. I don’t mind. I honestly didn’t even think about it at all until two months before. And I was like, “Oh, okay. I’m 40. This happened. Wow.” But that’s one of those things I journal about!

This interview has been edited and condensed.